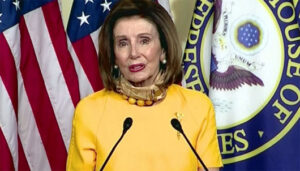 Speaker of the House Nancy Pelosi has announced Congress will be taking action immediately as the situation in Afghanistan rapidly deteriorates. To hold those responsible for the evacuation debacle, Congress will consider articles of impeachment against President Donald Trump.

“Good morning, Thursday morning,” Pelosi said during a press conference this morning, which was Thursday morning. “We’re facing a dire situation in Afghanistan, and that means we as Congress need to do our duty to hold those responsible accountable for their horrible, horrible actions. That’s why, effective immediately, I’m introducing articles of impeachment against the president. President Donald Trump.”

Trump says he welcomes the impeachment as he will be the first president in the history of the world to be acquitted three times. “That’s huge!” he said, addressing his supporters on the few social networks that have not yet banned him. “Sleepy Joe hasn’t even been acquitted once. Sad and pathetic!”