Impeachment burnout? Or will conspiracy to disrupt election continue?

Republican fence-sitters Sens. Lisa Murkowski and Lamar Alexander have indicated they will vote against allowing witnesses in the Senate impeachment trial.

The announcements by Murkowski and Alexander all but assured the Senate will move to quickly end the proceedings with a likely acquittal of President Donald Trump in a matter of days. 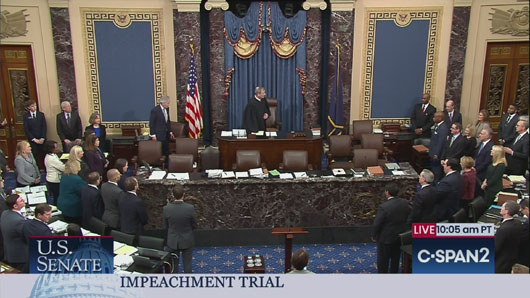 Not for Democrats who continue to fantasize about keeping Trump off the ballot this November, reports say.

Trump’s legal team is now focusing on keeping the president on the 2020 primary and general-election ballots “so that he can return to office if he’s given the boot — or impeached again this year, as some House Democrats are predicting,” Washington Examiner columnist Paul Bedard noted on Friday.

“While there is no precedent, officials are conferring with constitutional scholars to determine the president’s ballot rights, because one thing is clear, a close political Trump ally said: ‘He’s going to run no matter what happens.’ ”

Republican Sen. Rand Paul, in an interview with Bedard, said the potential ballot confusion was “not emphasized enough,” and he believed that it was one of the key reasons Democrats have pushed impeachment to the cliff.

The goal of the Democrats, Paul said, is not protecting democracy, but ruining the GOP’s election chances.

“Do you think [Democratic impeachment manager] Adam Schiff is just doing this because he’s such a stand-up citizen? Or do you think he cares about damaging people of the opposite political party?” Paul asked.

“If you get through March before this happens, if we do an investigation, and then all of a sudden, they remove him, and he can’t be on the ballot, [Democrats] have completely destroyed the 2020 election for the other party. Which is the ultimate irony of this whole thing. They’re using the government, they’re using the government to go after political enemies,” Paul added.

“Not one person on the Left in the media is questioning at all the motives of Adam Schiff, but they are all questioning the president’s motives,” Paul said, then offered a reason for the double standard. “They hate the president so much.”

The Democrats spent more than 3 years building up to this impeachment moment, “but now no one’s even watching,” Daniel Greenfield noted in a Jan. 28 op-ed for FrontPage magazine.

“The declining ratings tell the tale of a scam gone wrong. The media spent years promising a definitive takedown of Trump. Comey’s testimony was going to take down Trump. And then the Mueller investigation would see him in prison. Impeachment was going to be the grand finale. But it’s over,” Greenfield wrote.

“It was always over once it was clear that Trump had the votes to survive a Senate trial. And if he does, then what’s the point? The ratings declines reflect public sentiment that the trial is pointless and fatigue with Trump Derangement Syndrome that had buoyed the media for years.”

The Impeachment Eve rallies that were so hyped by the corporate media failed miserably, Greenfield noted. Turnouts in Boston, Chicago, and Philadelphia were only in the hundreds.

“Breaking Down the Big Impeachment Rally Mystery,” an NBC News headline speculated. “Democrats have flooded the streets by the millions to protest Trump before. So why did the protests calling for his removal stay so modest?”

“I Don’t Understand Why There Aren’t Thousands of People Protesting the Senate Trial,” Esquire fumed.

“Where the Hell are the Impeachment Protests?” Washingtonian demanded.

As Greenfield pointed out, the “same place” as the impeachment ratings.

“After Comey, the Kavanaugh hearings, and the Mueller investigation, burnout and defeatism has set in. Even as House and Senate Democrats pursued their misguided impeachment bid, their base was no longer showing up. Not in the streets or even on their television sets. They’re not up for it anymore,” Greenfield wrote.

“Charlie Brown had finally figured out that he was never going to be allowed to kick the orange football.”