‘I am a Democrat and I hate Obamacare’

The following letter to the editor was published today by the Fairfax Citizen.

I am a Democrat and I hate Obamacare. 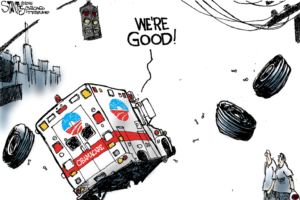 In my work, I help seniors with Medicare bill problems. The Obamacare law cut over $700 billion of Medicare benefits for senior citizens and created many other problems for those who are not senior citizens. With Obamacare, the Democratic Party became the party that hates and hurts senior citizens.

My friends report to me that their health insurance premiums under Obamacare have risen over 300 percent. The Obamacare law did not lower health insurance costs for the average American family as Obama and other Democrats promised. It was all a pack of lies to benefit certain special interests.

The Democrats who voted for Obamacare blindly followed Obama, Harry Reid, and Nancy Pelosi in goose-stepping blind loyalty without questioning anything.

Those Democrats represent the fascist-socialist wing of the Democratic Party. They are too far left. That is why millions of Democrats voted for Donald Trump — including me.

To Republicans in Congress, I say, please get rid of Obamacare.

Anything would be better than Obamacare.

‘I am a Democrat and I hate Obamacare’, WorldTribune.com