How wrong were the polls? ‘Trump’s path to victory … nonexistent’, the Washington Post announced on Oct. 18

The Post’s pollsters came to the conclusion that it was mathematically impossible for Donald Trump to get to the 270 electoral vote threshold. 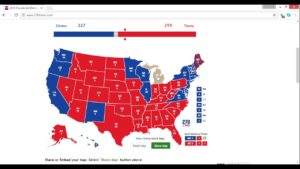 But the Post was not alone in its inability to do the math. As the polls were closing on Nov. 8, the New York Times gave Hillary Clinton an 80 percent chance of winning.

“Everybody around elites — namely other elites — were saying Hillary was going to take it,” Matt Briggs, a teacher of statistics at Cornell University said.

“It’s difficult to discount the opinion of all your colleagues. Wishcasting, a type of confirmation bias well known to meteorologists, also played a role. Wishcasting is when the evidence that supports a strong desire is given more weight than it deserves. Is there any doubt the whole of the elite media were desperate for Hillary to win?”

Polling guru and ABC News analyst Nate Silver, who runs the website FiveThirtyEight.com and who confidently predicted a Clinton victory, said: “It’s the most shocking political development of my lifetime.”

“That ball is shattered in a thousand pieces,” Sabato said on Fox & Friends on Nov. 9. “I’ve got to order a new one.”

The biggest goofs were in polling for the states that tipped the scales in Trump’s favor.

About the only polling firm to actually get it right was the little-known Trafalgar Group in Atlanta.

“Trafalgar Group and its seven employees discovered during comparison polling that some Trump voters would not disclose how they planned to fill out their ballots,” Rowan Scarborough wrote for The Washington Times on Nov. 9. “After all, the liberal news media and Clinton had labeled Trump followers as deplorable people.

“So the company used robotic calls for which Trump voters seemed more comfortable. They also added a ‘neighbor’ question, figuring that a respondent would be more willing to answer truthfully if a neighbor was voting for Trump.”

Trafalgar predicted Trump would win Pennsylvania and Michigan and also nailed results in North Carolina and Georgia and predicted a Trump win in Florida.

It also said Trump would receive 306 electoral votes. He is likely to end up with that exact number.

2016 presidential election, How wrong were the polls? ‘Trump’s path to victory … nonexistent’, the Washington Post announced on Oct. 18, WorldTribune.com