How they did it: True the Vote releases astounding video clips

Video clips posted on social media this week previewed startling and massive data compiled by True the Vote, evidence of widescale ballot trafficking in the 2020 election. 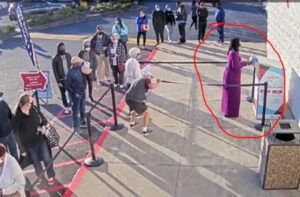 “This is 100% conclusive and determinative evidence. When will the Republicans finally act. Not only was the 2020 Election Rigged, but they’ll do it again. Leadership, for once, must step up to the plate and hit the ball out of the park. This is your chance. The people, who are disgusted with your weakness and indifference, are waiting,” former President Donald Trump said in an April 12 statement.

“Schumer and Pelosi would never stand for this if it were the other way around. This is ‘foolproof,’ on video tape for everyone to see. Do something!”

Many of the clips will be seen in Dinesh D’Souza’s documentary “2000 Mules”, which will be released early next month.

THE MOST SECURE ELECTION IN HISTORY

Here’s a woman stuffing the ballot box in broad daylight in Gwinnett County, Georgia in the November 2020 Election pic.twitter.com/sqUfuONfGP

This is how Third World countries operate pic.twitter.com/kRnreyPxpo

Philadelphia was the worst.

1,155 mules trafficked ballots to 10 or more drop boxes and 5 or more NGOs where they stash ballots pic.twitter.com/joBZMQBvhS

“This is a conspiracy.”

Everywhere they followed the same playbook:

Set of collectors, use NGOs as stash houses, bundle ballots, then cast them in drop boxes by mules pic.twitter.com/fo9tghk4ij

Ballot trafficking is the norm in parts of Arizona

Mules paid between $10 and $40 a ballot pic.twitter.com/S0VsWPgGoB

Not a single state, many where Republicans have majorities in the state legislature, has banned drop boxes

In Georgia they just moved them inside! pic.twitter.com/aU7SXszJq5

Full video of True the Vote’s Catherine Engelbrecht and Gregg Phillips on The Charlie Kirk Show:

2020 election, How they did it: True the Vote releases astounding video clips, WorldTribune.com

How they did it: True the Vote releases astounding video clips added by Editor Two on April 12, 2022
View all posts by Editor Two →