How the Washington Post is profiting from its own ‘fake news’

Two recent articles in The Washington Post on alleged Russian threats to the U.S. went massively viral for the venerable D.C. paper that enjoys the financial backing of Amazon billionaire, Jeff Bezos.

The stories, one on how Russia was behind the avalanche of “fake news” during the 2016 presidential election and the other on Moscow’s alleged attempt to hack the U.S. electric grid, turned out to be false. 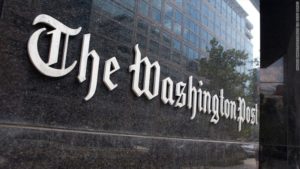 The Post printed retractions on both, but not before cashing in on its own “fake news”.

“After spreading the falsehoods far and wide, raising fear levels and manipulating U.S. political discourse in the process (both Russia stories were widely hyped on cable news), journalists who spread the false claims subsequently note the retraction or corrections only in the most muted way possible, and often not at all,” Glenn Greenwald wrote for The Intercept on Jan. 4. “As a result, only a tiny fraction of people who were exposed to the original false story end up learning of the retractions.”

A full two weeks after publishing a story alleging that a Russian propaganda campaign aided the spread of “fake news” in the 2016 presidential election, the Post added the following editor’s note to the article:

“The Washington Post on Nov. 24 published a story on the work of four sets of researchers who have examined what they say are Russian propaganda efforts to undermine American democracy and interests. One of them was PropOrNot, a group that insists on public anonymity, which issued a report identifying more than 200 websites that, in its view, wittingly or unwittingly published or echoed Russian propaganda. A number of those sites have objected to being included on PropOrNot’s list, and some of the sites, as well as others not on the list, have publicly challenged the group’s methodology and conclusions. The Post, which did not name any of the sites, does not itself vouch for the validity of PropOrNot’s findings regarding any individual media outlet, nor did the article purport to do so. Since publication of The Post’s story, PropOrNot has removed some sites from its list.”

When its Dec. 30 piece on Russia’s “penetration of the U.S. electricity grid” fell apart, the Post printed a full-scale retraction in the form of a separate article admitting that “the incident is not linked to any Russian government effort to target or hack the (Vermont) utility.”

Kalev Leetaru, senior fellow at George Washington University, concluded that the Post “did not even bother to contact the utility companies in question — the most elementary step of journalistic responsibility — until after the story was published. Intelligence officials insisting on anonymity — so as to ensure no accountability — whispered to them that this happened, and despite how significant the consequences would be, they rushed to print it with no verification at all.”

Greenwald noted: “This is not a case of good journalism producing inaccurate reporting; it is the case of a media outlet publishing a story that it knew would produce massive benefits and consequences without the slightest due diligence or care.”

The erroneous articles may have embarrassed the paper, by they were also richly rewarding, Greenwald said.

“That’s because journalists — including those at the Post — aggressively hype and promote the original, sensationalistic false stories, ensuring that they go viral, generating massive traffic for the Post. That the story ends up being completely discredited matters little.”

2016 presidential election, How the Washington Post is profiting from its own ‘fake news’, U.S. electric grid, WorldTribune.com