How socialism is working in NYC: Bumps on the ‘progressive’ road

The mayor, a favorite of “progressives,” recently abandoned his “Renewal” initiative aimed at improving the city’s struggling schools – after allocating $773 million on the project, The New York Times reported. 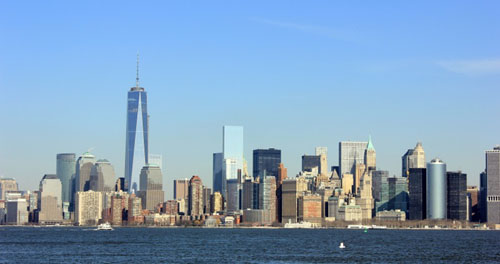 Late last month, Politico reported that the “ThriveNYC” mental health initiative led by de Blasio’s wife, Chirlane McCray, has spent $850 million as it “operated without much scrutiny or accountability.”

De Blasio contends that the obstacle to economic progress in the Big Apple is private property. The mayor would like to see politicians determine where every building should be built and “who gets to live in it.”

“What’s been hardest is the way our legal system is structured to favor private property. I think people all over this city, of every background, would like to have the city government be able to determine which building goes where, how high it will be, who gets to live in it, what the rent will be. I think there’s a socialistic impulse, which I hear every day, in every kind of community, that they would like things to be planned in accordance to their needs. And I would, too. Unfortunately, what stands in the way of that is hundreds of years of history that have elevated property rights and wealth to the point that that’s the reality that calls the tune on a lot of development….

“Look, if I had my druthers, the city government would determine every single plot of land, how development would proceed. And there would be very stringent requirements around income levels and rents. That’s a world I’d love to see, and I think what we have, in this city at least, are people who would love to have the New Deal back, on one level. They’d love to have a very, very powerful government, including a federal government, involved in directly addressing their day-to-day reality.”

In an op-ed for USA Today, David Boaz wrote: “This is mind-boggling. The mayor of the world’s financial center, the hub of American and global capitalism, thinks that the obstacle to progress is private property, the institutional system that has brought billions of people around the world out of back-breaking poverty. Mayor de Blasio says he’d like to have the power to determine what happens on every piece of land in the city. Other leaders have had such power, in the Soviet Union and China and Venezuela, and those systems did not produce progress. Or even toilet paper.”

Meanwhile, as Judicial Watch’s Michah Morrison noted, “A ‘progressive’ mob so terrified the Amazon behemoth that it abandoned plans to build a giant technology hub in New York and fled, costing the city 25,000 jobs. Murders and domestic assaults, while still low by historical measures, have jumped. Ditto hate crimes. So-called ‘quality of life’ offenses like subway turnstile jumping, public urination, public drinking and littering have been decriminalized as part of the social experiment.”

The program, started in January 2015, was alloted $850 million over four years.

“Four years later, no one can figure out where the money went,” Morrison noted.

After Politico broke the story in late February, City Council members complained that promised programs had not appeared in their districts and demanded answers on spending. Councilman Joe Borelli directed City Hall to produce Thrive’s performance data for the past four years. “It’s critically important for all city initiatives to maintain a level of transparency which allows the public to have oversight and allay concerns about government waste,” Borelli said, “especially with tremendous sums.”

City Comptroller Scott Stringer announced plans to investigate. “I’ve had concerns about the lack of transparency in the Thrive program,” Stringer said at a press conference. He said he “sent a letter to Mayor de Blasio asking for a trove of information raising concerns about the program and whether, in fact, we are seeing results for the $850 million.”

On abandoned school “Renewal” program, the New York Times reported in October that city officials “had known some Renewal schools were likely to fail but had left most of them open anyway. As a result, officials essentially kept thousands of children in classrooms where they had little if any chance of thriving.”

“The programs at issue ostensibly are meant to assist particularly challenged people,” McManus wrote, “the helpless, often homeless, mentally ill and small children whose futures are forfeited because they landed in shamefully nonfunctional schools, an experience from which they will never recover. But there are other mysteries out there, too. Does anybody know how well – more likely, how poorly – the [de Blasios’] hugely expensive pre-K program is working, especially that portion consigned to the city’s notoriously problematic not-for-profit sector? How about the Hurricane Sandy recovery effort – six years, uncountable delays and billions of dollars later? Has anybody even looked?”