Rolling him out on national TV as some kind of infotainment spectacle shows how truly degenerate our ruling apparatus is. The cold-blooded killer of Jan. 6 protester Ashli Babbitt took to NBC on Aug. 26 to weepily declare his steadfast devotion to duty via a friendly and compliant big-box media platform. 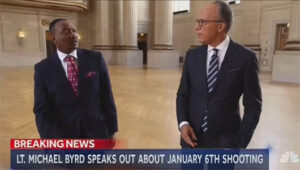 U.S. Capitol Police Lt. Michael Byrd played the victim and racism cards within the first minute of his appearance with NBC pre-programmed automaton Lester Holt. From a transcript provided by NBC News (bold added throughout):

LIEUTENANT MICHAEL BYRD: [People making threats against him] talked about, you know, killing me, cutting off my head. You know, very vicious and cruel things.

LIEUTENANT MICHAEL BYRD: There were some racist attacks as well. It’s all disheartening because I know I was doing my job.

LESTER HOLT: Given the nature of the threats that you describe, do you have any concern about showing your face and identifying yourself?

LIEUTENANT MICHAEL BYRD: Of course, I do. That is a very vital point. And it’s something that is frightening. I believe I showed the utmost courage on January 6th. And it’s time for me to do that now.

You would think a professional “newsman” would immediately want to ask the police officer in such a case why he chose to open fire on a totally unarmed female who posed no immediate threat to him without giving any warning whatsoever. But that would be a silly thought, of course. Such questions only apply when the races are reversed, no matter how dangerous the circumstances may have been.

Instead we get hand-holding from our intrepid reporter:

LESTER HOLT: Were you afraid that day?

LESTER HOLT: What are you hearing on your radio?

NBC then shamelessly portrays Babbitt as an unhinged threat, affixing the dreaded “Qanon” extremist label onto her dead body and parroting Byrd’s claims to have warned protesters away before opening fire:

LESTER HOLT VOICE OVER: HE SAYS OFFICERS BARRICADED THE DOOR. WHAT HE CONSIDERED THE LAST LINE OF DEFENSE.

LIEUTENANT MICHAEL BYRD: I had been yelling and screaming as loud as I was, “Please stop. Get back. Get back. Stop.” We had our weapons drawn.

LESTER HOLT VOICE OVER: BYRD,ONLY HIS HAND AND GUN VISIBLE, TARGETED A FIGURE TRYING TO CLIMB THROUGH A WINDOW.

Make no mistake, that one magic word is meant to make it alright. Killing Trump supporters is understandable and falls fully within the line of duty, NBC News has confirmed. Especially the really crazy ones who believe the so-called “mainstream” media are working hand in glove with an artificially imposed political establishment. How nuts is that?

Despite the fact that video shows him popping into a corridor and shooting Babbitt, showing not even the slightest bit of restraint, Byrd says he was extremely reluctant to fire at her:

LESTER HOLT: We see your arm out there for a considerable amount of time. Were you wavering?

LIEUTENANT MICHAEL BYRD: I was again taking a tactical stance. You’re ultimately hoping your commands will be complied with and unfortunately they were not.

LESTER HOLT: When you fired, what could you see? Where were you aiming?

Byrd acknowledged he was not attempting any kind of wing shot at the unarmed Babbitt:

LIEUTENANT MICHAEL BYRD: You’re taught to aim for center mass. The subject was sideways and I couldn’t see her full motion of her hands or anything. So I guess her movement caused the discharge to fall where it did.

LESTER HOLT: And what did you think this individual was doing at that moment?

LIEUTENANT MICHAEL BYRD: She was posing a threat to the United States House of Representatives.

Amazingly, Byrd fully admits Babbitt wasn’t armed yet he still felt compelled to “aim for center mass” against her:

LESTER HOLT: Her family points out that she was not armed.

LESTER HOLT: The fact that you weren’t aware whether she was armed or not, did that alter the decision making?

LIEUTENANT MICHAEL BYRD: It did not.

LESTER HOLT: What are we to make of the fact that there were other officers in potentially life threatening situations who didn’t use their service weapons that day?

LIEUTENANT MICHAEL BYRD: I’m sure it was a terrifying situation. And I can only control my reaction, my training, my expertise. That would be upon them to speak for themselves.

Yes, about that training and expertise. This of course would be the ideal time to bring up Byrd’s documented record of gross incompetence, something even NBC couldn’t ignore:

LESTER HOLT: A few years ago, you were investigated for leaving your service weapon in a bathroom. And that’s been brought up by those who are questioning your competency. You want to respond to that?

LIEUTENANT MICHAEL BYRD: Sure. It was a terrible mistake. I acknowledged it. I owned up to it. I accepted the responsibility. I was penalized for it. And I moved on.

And that is the full extent of that matter. Again, any reputed journalist worth their salt would dig in deeply here to try to gauge the officer’s sense of judgment and basic ability to do his job. Especially considering what Byrd “moved on” to. Yet NBC intentionally provides only the thinnest glossing-over it could possibly get away with.

From there, Holt immediately pivots to emphasize the ruling regime’s full exoneration of Byrd:

LESTER HOLT: Capitol Police in their press release after exonerating you said your actions potentially saved members and staff from serious injury and possible death. What was it like to hear those words, to see those words?

LIEUTENANT MICHAEL BYRD: Those words meant a lot because that’s exactly what I did on that day. That was my mission. That was what I prepared for. And it’s rewarding and refreshing to hear that.

And thus ended a truly sickening media production. Its importance should not be understated, for it marks a new watershed low for establishment news organs.

This is NBC using the old 20/20 Hugh Downs formula of soft-lens “entertainment TV news” to literally justify and support the killing of American citizens who oppose the Swamp Uniparty.

Respect for U.S. media entities has plummeted to the point where a good many Americans truly consider American journalists to be “enemies of the people.” NBC News just brought a lot more people into that camp with this Pravda-like performance for our murderously out-of-touch ruling elite.