How ‘Landslide Lyndon’ stole the Senate race in 1948 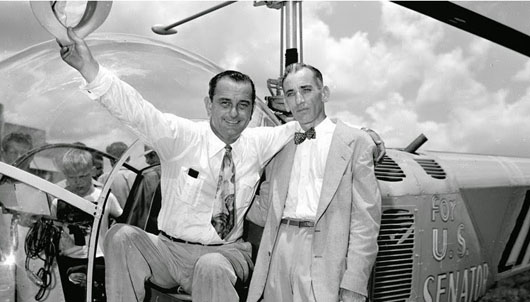 Then, mysteriously, a box of uncounted ballots was “discovered” in the south Texas town of Alice in Jim Wells County, Precinct 13. Confusion reigned in Texas and by the end of the week, LBJ won by 87 votes. Both sides accused the other of voter fraud.

The FBI, Postal Department and other agencies investigated. Piecing together the details, the story emerged alleging that during the tabulation period, LBJ’s campaign manager, John B. Connally, traveled to Alice, Texas.

With access granted by wealthy “political boss” of Duval County, George Parr, who later committed suicide, John Connally was present when the ballots were recounted and the returns amended.

When the dust settled, the new totals showed 202 additional voters, some of whom were deceased and buried in the local cemetery or were absent from the county on election day. These voters “lined up” in alphabetical order at the last minute, signed in the same blue ink in the same handwriting and all cast their ballots for LBJ.

“The disclosure was made by Luis Salas, who was the election judge for Jim Well’s County’s Box 13, which produced just enough votes in the 1948 Texas Democratic primary runoff to give Mr. Johnson the party’s nomination for the United States Senate … ‘Johnson did not win that election – it was stolen for him and I know exactly how it was done,’ said Mr. Salas, now a lean, white-haired 76 year old … George B. Parr, the South Texas political leader whom Mr. Salas served for a decade, shot and killed himself in April of 1975. Mr. Johnson is dead and so is his opponent … Mr. Salas said he decided to break his silence in quest for ‘peace of mind’ … ‘I was just going along with my party’ … He said Mr. Parr ordered that 200-odd votes be added to Mr. Johnson’s total from Box 13.

“Mr. Salas said he had seen the fraudulent votes added in alphabetical order and had them certified then as authentic on order from Mr. Parr … Parr was the Godfather … He … could tell any election judge: ‘give us 80 percent of the vote, and the other guy 20 percent.’ We had it made in every election …”

“The Associated Press interviewed … a former agent of the Federal Bureau of Investigation, T. Keilis Dibrell … He confirmed Mr. Salas’ statement that the last 200 votes had been in alphabetical order’ … Mr. Dibrell said ‘Also, the last 202 names were made with the same colored ink, and in the same handwriting, whereas the earlier names in the poll list were written by different individuals and in different color inks.’

On Sept. 28, 1948, Justice Black overturned the lower court ruling, letting the decision in the Johnson-Stevenson race rest with the Texas Democrat Central Committee.

In return for his favor, Abe Fortas was nominated by President Lyndon Johnson in 1965 to be a Justice on the U.S. Supreme Court.

During LBJ’s term as President, many records of LBJ’s contested race disappeared.

“The slimy creature who stole the 1948 Texas Senate election … Lyndon Johnson … driven by ‘a boundless ambition … his career had been a story of manipulation, deceit and ruthlessness … the morality of the ballot box … in which nothing matters but victory and any maneuver that leads to victory is justified … Johnson … stole the victory in the 1948 Senate race … That campaign was an American classic … Johnson battled … a strongly favored opponent to win by the narrowest of margins — the 87-vote victory that earned him the derisive nickname of ‘Landslide Lyndon’ …

Johnson went through an equally breathless battle in the state convention and the courts to make his clearly tainted victory stand up.”

“Voter fraud is no newcomer to the Lone Star State. Six decades ago, the votes ‘found’ in Jim Wells County’s infamous Ballot Box 13 helped Lyndon Johnson squeak into the U.S. Senate in that 1948 primary.”

How ‘Landslide Lyndon’ stole the Senate race in 1948, WorldTribune.com