The 2016 major party presidential candidates differ greatly on how they define the terrorist organizations that America has been fighting for the last 15 years. 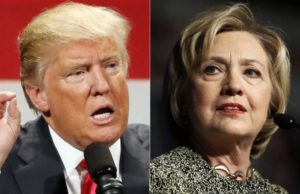 Republican nominee Donald Trump has been highly critical of Democratic nominee Hillary Clinton for refusing to define the threat as “radical Islamic terrorism.”

Clinton, meanwhile, routinely cautions against “inflammatory anti-Muslim rhetoric” in the wake of terror attacks on the homeland.

Trump’s team of campaign advisers includes several former generals and defense officials who see and define the threat as he does.

Former CIA Director James Woolsey, who has authored papers on the extremist Islamic threat, has joined the campaign as a foreign policy adviser.

Also in Trump’s camp is retired Army Lt. Gen. Michael T. Flynn, who led the Defense Intelligence Agency under President Barack Obama. Flynn has said he was fired by the White House for “promoting the idea that there is a radical Islamic movement that must be confronted.”