In keeping with the soulless PC spirit of most bland corporations today, professional sports teams frequently host Pride Nights where they can flash their social justice bona fides in a lemming-like manner that most Americans have become inured to.

But some teams take things to another level, showing a stridency that separates them from the rest of the PC business pack. 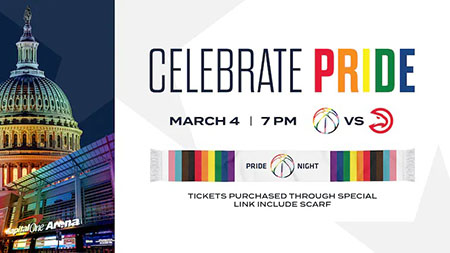 The NBA’s Washington Wizards may be a decades-long loser on the basketball court, but when it comes to promoting sexual degeneracy, including warping young children’s minds, the franchise takes a back seat to nobody.

The Wizards are touting their flamboyant and sexually charged 2022 celebration of Pride Night:

The Washington Wizards will host their annual Pride game on Friday, March 4, at 7:00 p.m. when the Atlanta Hawks come to Capital One Arena.

The Wizards Dance Team led by guest performer and burlesque entertainer Betty O’Hellno, will perform a new routine during halftime. The Dance Team, performing to Madonna’s hit “Vogue”, will pay tribute to voguing and other dance styles prominent in the LGBTQ+ community. Drag queen performer, Shi-Queeta Lee, the first drag performer to be invited to perform at the White House, will share in-game hosting duties with Britt and Dennis.

Yes, you read that right. An NBA team is conducting a homosexual burlesque show as halftime entertainment.

Don’t expect the Wizards to be worried about receiving any negative flak from this outrage. In fact, the franchise has every right to believe it will be praised to the skies. In 2020, the team was given the splashy national network treatment by ABC’s AM flagship “Good Morning America” program for inviting a transgender “woman” to perform a halftime routine at Pride Night:

With her soft, golden curls moving left to right in harmony with one another, Riley Knoxx, 38, channels her inner Beyonce. At first glance, the Beyoncé lookalike is the spitting image of Queen Bey herself; Knoxx says she constantly gets mistaken for the music superstar all the time.

She not only looks like Beyoncé, but is also known throughout the country as the top Beyoncé impersonator.

The “Illusion of Queen Bey,” as she calls it, will make history Friday as Knoxx becomes the first openly transgender woman to perform at an NBA halftime show thanks to the Washington Wizards.

Mr. Beyonce expressed his astonishment that the Wizards sought him out:

“They reached out to me, believe it or not,” Knoxx told “Good Morning America” with a giggle. “They have been watching for a while and they’ve been wanting me to perform at their events, but they were just waiting for the right time and space. And it just worked out that because they were watching, that’s how I got this chance.”

One can only hope no young children were in the audience. The league posted the routine on its official NBA.com website. You probably don’t want to give it a watch. This is what you get when the league commissioner sits on the Board of Trustees for the Rockefeller Foundation.

Speaking of children, unfortunately we must, because this form of perversion is always aimed at America’s youth. The Wizards have announced that 2022’s Pride Night will help raise money for an organization that nurtures “trans and nonbinary youth” in the D.C. area:

The team will recognize and support the LBGTQ+ community throughout the game. LED signage and logos will be displayed in Pride flag themed colors and all arena staff will wear special pride pins. The 50/50 Raffle will also benefit SMYAL (Supporting and Mentoring Youth Advocates and Leaders), a non-profit organization that supports and empowers lesbian, gay, bisexual, transgender, and questioning (LGBTQ) youth in the Washington, D.C. metropolitan region.

SMIYAL seeks to creating opportunities for LGBTQ youth to build self-confidence, develop critical life skills, and engage their peers and community through service and advocacy.

And what does supporting six-year-old trans youths encompass? A Feb. 24 SMYL re-tweet showcases a picture of a homosexual mock-nun troupe known as “The Abbey of Magnificent Intentions,” a DC “house” associated with the viciously anti-Catholic San-Francisco-based “Sisters of Perpetual Indulgence.”

Note the background in the picture. This is what “empowering LGBTQ youth” is all about:

Not to be outdone, MLB’s Washington Nationals and the NHL’s Washington Capitals have also openly supported SMYAL:

We caught up with Ty to hear more about the ways SMYAL empowers LGBTQ+ youth in the DMV and beyond.#PrideNight🏳️‍🌈 | #ALLCAPS pic.twitter.com/F93UtQVZBW

These professional sports teams are actively participating in the destruction of young minds and souls. And make no mistake, SMYAL is going after the youngest of children. A “Little SMYALs for queer and trans youth” page on its website states:

Little SMYALs is a group dedicated to 6-12 year olds to provide young people a safe(r) space to hang out and meet new people, access resources, and gain support.

SMYAL Community Engagement & Youth Leadership Manager Ty Kitchen is listed as an organizer of this deeply disturbing program. This would be the same Ty Kitchen prominently featured by the NHL Capitals.

The Capitals have been an energetic financial booster of SMYAL for some time now.

From a Sept. 2020 NHL.com team post on its charity endeavors:

The Capitals and Wizards are both owned by Monumental Sports and Entertainment, the company founded by Ted Leonsis.

Pornography at halftime and cultivating six-year-old transgender kids. The trajectory of professional sports being harnessed as a vehicle for spreading the worst possible Cultural Marxism rot is rapidly approaching Hollywood-level depravity.