Syrian regime forces and Iran-backed Hizbullah fighters are planning a large-scale operation against anti-Assad forces in Syria near the border with Israel, Iranian state media reported.

“The Syrian army and Hizbullah fighters have been working on a joint plan to end militancy in Southern Syria, particularly near the Golan Heights,” Iran’s Fars news agency quoted unnamed military sources as saying on Sept. 5. 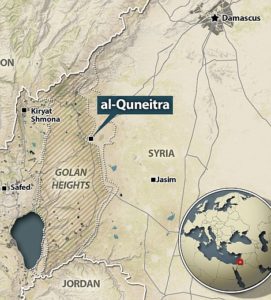 The sources told Fars that Hizbullah has deployed a large group of fighters near the Quneitra area, located between Syria and the Israeli Golan Heights.

Pro-Syrian government forces, including Hizbullah, have strongholds in the Quneitra province. Western-backed rebels, and groups which have pledged allegiance to Islamic State of Iraq and Levant (ISIL) also operate in the region.

With Russia carrying out airstrikes from Iranian bases, and Turkish forces engaged in a ground assault against ISIL and Kurds in the north, Israeli officials see the Syrian conflict moving into an even more chaotic phase.

Israel has mostly stayed out of the conflict in Syria but reportedly has targeted Hizbullah officials and arms convoys inside Syria several times.

Israel maintains close intelligence on its neighbors and has a special channel of communication with Russia to remain informed on Syria.