Hillary to (sleeping) Joe: Coronavrius ‘would be a terrible crisis to waste’

Hillary Clinton on April 28 joined in a bizarre video chat with presumptive Democratic nominee Joe Biden and endorsed him for president. At one point during what many said was a less-than-lively chat, Biden appeared to nod off. 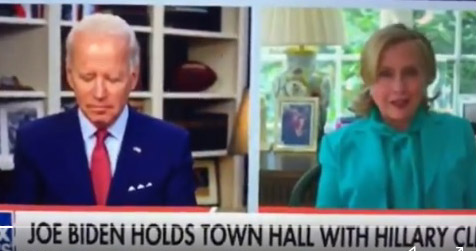 “And it went downhill from there,” RedState’s Nick Arama noted.

Clinton took the opportunity to point to the “positive” in the coronavirus pandemic.

“This is a high stakes time because of the pandemic, but this is also a really high stakes election,” Clinton exclaimed. “Every form of health care should continue to be available, including reproductive health care for every woman in this country, and then it needs to be a part of a much larger system that eventually, and quickly I hope, gets us to universal health care.”

“This would be a terrible crisis to waste,” Clinton concluded, saying it was now necessary to resolve “health injustice” and “economic injustice.”

Arama noted that Biden then “did a ‘Hillary Deplorable’ moment and chastised the states who didn’t vote for her, you know those same states that he would need to have to win.”

Yes, Biden actually said he couldn’t believe “the way in which some of the states acted” in 2016.

Arama noted: “Great job there, Joe! Hillary just ignored Wisconsin, Joe managed to insult the intelligence of every state that didn’t vote for Hillary. I’m sure that will encourage those states to vote for him. Not.”

Meanwhile, Tara Reade accused Clinton of “enabling a sexual predator” by endorsing Biden, who Reade alleges sexually harassed and assaulted her in 1993.

“I voted for Hillary Clinton in 2016. I voted for her in the primary. I’m a lifelong Democrat. But yet, what I see now is someone enabling a sexual predator, and it was my former boss, Joe Biden, who raped me,” Reade told Fox News on Tuesday. “Hillary Clinton has a history of enabling powerful men to cover up their sexual predatory behaviors and their inappropriate sexual misconduct. We don’t need that for this country. We don’t need that for our new generation coming up that wants institutional rape culture to change.”

Reade says she will no longer support either party in national elections because of how her allegations have been handled by the “corporate press” and Biden’s campaign.