“How did a temporary plan to preserve hospital capacity turn into two-to-three months of near-universal house arrest?”, an analyst asked. 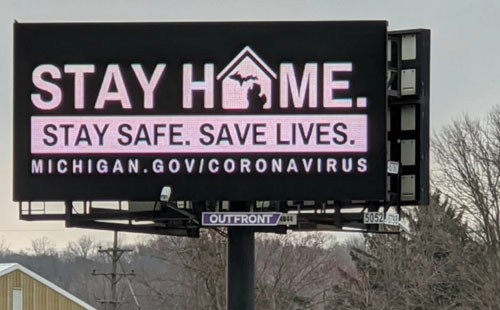 Coronavirus lockdowns led to a 40 percent job loss among people earning less than $40,000 per year, worker furloughs at hundreds of hospitals, a stoppage of international travel, and “devastation of every economic sector, mass confusion and demoralization, a complete ignoring of all fundamental rights and liberties, not to mention the mass confiscation of private property with forced closures of millions of businesses,” Jeffrey A. Tucker noted in a May 15 analysis for the American Institute for Economic Research.

“Maybe you don’t remember that the avian flu of 2006 didn’t amount to much. It’s true, despite all the extreme warnings about its lethality, H5N1 didn’t turn into much at all,” Tucker pointed out.

What it did do, however, was send then-President George W. Bush “to the library to read about the 1918 flu and its catastrophic results. He asked for some experts to submit some plans to him about what to do when the real thing comes along.”

Fourteen years ago, two federal government doctors, Richard Hatchett and Carter Mecher, met with a colleague at a burger joint in suburban Washington for a final review of a proposal they knew would be treated like a piñata: telling Americans to stay home from work and school the next time the country was hit by a deadly pandemic.

When they presented their plan not long after, it was met with skepticism and a degree of ridicule by senior officials, who like others in the United States had grown accustomed to relying on the pharmaceutical industry, with its ever-growing array of new treatments, to confront evolving health challenges.

Drs. Hatchett and Mecher were proposing instead that Americans in some places might have to turn back to an approach, self-isolation, first widely employed in the Middle Ages.

How that idea — born out of a request by President George W. Bush to ensure the nation was better prepared for the next contagious disease outbreak — became the heart of the national playbook for responding to a pandemic is one of the untold stories of the coronavirus crisis.

It brought their work together with that of a Defense Department team assigned to a similar task.

And it had some unexpected detours, including a deep dive into the history of the 1918 Spanish flu and an important discovery kicked off by a high school research project pursued by the daughter of a scientist at the Sandia National Laboratories.

The concept of social distancing is now intimately familiar to almost everyone. But as it first made its way through the federal bureaucracy in 2006 and 2007, it was viewed as impractical, unnecessary and politically infeasible.

Tucker pointed out: “Notice that in the course of this planning, neither legal nor economic experts were brought in to consult and advise. Instead it fell to Mecher (formerly of Chicago and an intensive care doctor with no previous expertise in pandemics) and the oncologist Hatchett.”

Then there is also the mention of the 14-year-old high-school daughter of a Sandia scientist. Her name is Laura M. Glass, “and she recently declined to be interviewed when the Albuquerque Journal did a deep dive of this history,” Tucker noted.

Laura, with some guidance from her dad, devised a computer simulation that showed how people – family members, co-workers, students in schools, people in social situations – interact. What she discovered was that school kids come in contact with about 140 people a day, more than any other group. Based on that finding, her program showed that in a hypothetical town of 10,000 people, 5,000 would be infected during a pandemic if no measures were taken, but only 500 would be infected if the schools were closed.

That paper is Targeted Social Distancing Designs for Pandemic Influenza (2006). It set out a model for forced separation and applied it with good results backwards in time to 1957.

“They conclude with a chilling call for what amounts to a totalitarian lockdown, all stated very matter-of-factly,” Tucker noted.

Implementation of social distancing strategies is challenging. They likely must be imposed for the duration of the local epidemic and possibly until a strain-specific vaccine is developed and distributed. If compliance with the strategy is high over this period, an epidemic within a community can be averted. However, if neighboring communities do not also use these interventions, infected neighbors will continue to introduce influenza and prolong the local epidemic, albeit at a depressed level more easily accommodated by healthcare systems.

In other words, Tucker wrote, “it was a high-school science experiment that eventually became law of the land, and through a circuitous route propelled not by science but politics.”

The primary author of this paper was Robert J. Glass, a complex-systems analyst with Sandia National Laboratories. “He had no medical training, much less an expertise in immunology or epidemiology,” Tucker noted.

That explains why Dr. D.A. Henderson, “who had been the leader of the international effort to eradicate smallpox,” completely rejected the whole scheme.

According to the New York Times:

Dr. Henderson was convinced that it made no sense to force schools to close or public gatherings to stop. Teenagers would escape their homes to hang out at the mall. School lunch programs would close, and impoverished children would not have enough to eat. Hospital staffs would have a hard time going to work if their children were at home.

The measures embraced by Drs. Mecher and Hatchett would “result in significant disruption of the social functioning of communities and result in possibly serious economic problems,” Dr. Henderson wrote in his own academic paper responding to their ideas.

The answer, he insisted, was to tough it out: Let the pandemic spread, treat people who get sick and work quickly to develop a vaccine to prevent it from coming back.

Phil Magness of the American Institute for Economic Research found the literature responding to the 2006 paper by Robert and Sarah Glass and discovered Disease Mitigation Measures in the Control of Pandemic Influenza. The authors included D.A. Henderson, along with three professors from Johns Hopkins: infectious disease specialist Thomas V. Inglesby, epidemiologist Jennifer B. Nuzzo, and physician Tara O’Toole.

There are no historical observations or scientific studies that support the confinement by quarantine of groups of possibly infected people for extended periods in order to slow the spread of influenza. … It is difficult to identify circumstances in the past half-century when large-scale quarantine has been effectively used in the control of any disease. The negative consequences of large-scale quarantine are so extreme (forced confinement of sick people with the well; complete restriction of movement of large populations; difficulty in getting critical supplies, medicines, and food to people inside the quarantine zone) that this mitigation measure should be eliminated from serious consideration…

Home quarantine also raises ethical questions. Implementation of home quarantine could result in healthy, uninfected people being placed at risk of infection from sick household members. Practices to reduce the chance of transmission (hand-washing, maintaining a distance of 3 feet from infected people, etc.) could be recommended, but a policy imposing home quarantine would preclude, for example, sending healthy children to stay with relatives when a family member becomes ill. Such a policy would also be particularly hard on and dangerous to people living in close quarters, where the risk of infection would be heightened….

Travel restrictions, such as closing airports and screening travelers at borders, have historically been ineffective. The World Health Organization Writing Group concluded that “screening and quarantining entering travelers at international borders did not substantially delay virus introduction in past pandemics . . . and will likely be even less effective in the modern era.”… It is reasonable to assume that the economic costs of shutting down air or train travel would be very high, and the societal costs involved in interrupting all air or train travel would be extreme. …

During seasonal influenza epidemics, public events with an expected large attendance have sometimes been cancelled or postponed, the rationale being to decrease the number of contacts with those who might be contagious. There are, however, no certain indications that these actions have had any definitive effect on the severity or duration of an epidemic. Were consideration to be given to doing this on a more extensive scale and for an extended period, questions immediately arise as to how many such events would be affected. There are many social gatherings that involve close contacts among people, and this prohibition might include church services, athletic events, perhaps all meetings of more than 100 people. It might mean closing theaters, restaurants, malls, large stores, and bars. Implementing such measures would have seriously disruptive consequences…

Schools are often closed for 1–2 weeks early in the development of seasonal community outbreaks of influenza primarily because of high absentee rates, especially in elementary schools, and because of illness among teachers. This would seem reasonable on practical grounds. However, to close schools for longer periods is not only impracticable but carries the possibility of a serious adverse outcome….

Thus, cancelling or postponing large meetings would not be likely to have any significant effect on the development of the epidemic. While local concerns may result in the closure of particular events for logical reasons, a policy directing communitywide closure of public events seems inadvisable. Quarantine. As experience shows, there is no basis for recommending quarantine either of groups or individuals. The problems in implementing such measures are formidable, and secondary effects of absenteeism and community disruption as well as possible adverse consequences, such as loss of public trust in government and stigmatization of quarantined people and groups, are likely to be considerable….

Experience has shown that communities faced with epidemics or other adverse events respond best and with the least anxiety when the normal social functioning of the community is least disrupted. Strong political and public health leadership to provide reassurance and to ensure that needed medical care services are provided are critical elements. If either is seen to be less than optimal, a manageable epidemic could move toward catastrophe.

Tucker concluded: “Confronting a manageable epidemic and turning it into a catastrophe: that seems like a good description of everything that has happened in the COVID-19 crisis of 2020.”