Four years ago, globalists were on the precipice of solidifying and institutionalizing their revolution. 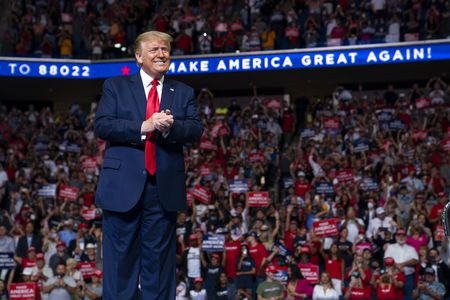 “Against all the money and clout of America’s revolutionary forces, the counterrevolutionary Trump had only one asset, the proverbial people,” historian and columnist Victor Davis Hanson wrote for American Greatness on Nov. 1.

Trump “had solely the under-polled and the written-off. They came out to his rallies in the tens of thousands, deluded the pollsters, and told the media less than nothing, but voted and will vote in waves to save America from what it was becoming,” Hanson wrote.

Before Trump’s arrival, China was set to “inherit the world in 20 or 30 years,” Hanson noted. “The self-appointed task of American elites — many of whom had already been enriched and compromised by Chinese partners and joint ventures — was to facilitate this all-in-the-family transition in the manner of the imperial British hand-off of hegemony to the United States in the late 1940s.”

Hanson continued: “Given our elites’ superior morality, genius, and sense of self, we would gently chide and cajole our Chinese masters into becoming enlightened world overseers and democrats—all the easier, the richer and more affluent Chinese became.

“For now, Trump has stopped that revolution.”

Before Trump’s arrival, “Big Tech was three-quarters home on the road to Nineteen Eighty-Four,” Hanson noted. “Five or six companies monopolized most American — and indeed the world’s — access and use of the Internet. In cynical fashion, Silicon Valley grandees patronized naïve conservatives that they were the supposed embodiment of Milton Friedman libertarianism and 19th century robber baron daring. Yet to their leftist kindred, the moguls of Menlo Park simultaneously whispered, ‘Don’t worry about such necessary disinformation: we will enrich only your candidates, only your agendas, only your foundations, only your universities—in exchange for your exemptions.’ ”

Antitrust legislation “was as much an anathema to good liberals as rigging searches, institutionalizing the cancel culture, and censoring thoughts and ideas were welcomed,” Hanson added.

“For now Trump, almost alone, is battling that revolution.”

Before Trump’s arrival, “there was increasingly no border at all. Fifty-million foreign-born resided, both legally and illegally, in the United States. Nearly a million annually walked northward across the border with ease and without legal sanction or invitation. To object to illegal immigration and decry its deleterious effects on the entry-level wages of our working poor, on the social safety net of the American needy, and on the sanctity of the law was to be smeared as racist, xenophobic, and nativist,” Hanson wrote.

“For now, Trump — with his soon-to-be 400-mile wall, his beefed up ICE, and his war on sanctuary nullification zones — has nearly stopped the revolution to end borders.”

Before Trump’s arrival, Hanson continued: “The American interior was loser country. In-between the two gilded coasts resided the deplorables, irredeemables, clingers, the smelly Walmart patrons decried in the Page-Strzok text exchanges, those John McCain called ‘crazies,’ and Joe Biden has variously called the ‘dregs,’ the ‘chumps’ and the ‘ugly folks.’

“Translated, that meant on the eve of the Chinese takeover, our clueless deplorables never learned to code, or to borrow $200,000 to get a woke-studies education, and so deserved the opioids they took and the trailers they crashed in.

“Few apostates said, ‘Wait a minute! The United States has cheaper energy than anywhere on earth, a skilled workforce, a huge domestic market, and a still-viable infrastructure. There was a reason why Michigan, Ohio, and Pennsylvania once led the world and why they can again.’

“Through tax reform, deregulation, trade rebooting, a new foreign policy, and loud jawboning, Trump for a while has stopped the revolution that was destroying our once greatest states.”

The revolution, Hanson noted, “toppled statues, renamed what it did not like, Trotskyized the past, photoshopped the present, and used language, government, and cultural intimidation to do its best to make America into Animal Farm.”

“Somewhere, somehow graduations, dorms, and campus spaces, all segregated by race, became ‘liberal.’ Intermarriage, integration, and assimilation were shamefully illiberal. Standing for the National Anthem was unpatriotic; sitting in disdain for it, cool.

“Donald Trump fought that revolution too.”

Who enabled Trump to wage these counterrevolutions?

No, Hanson concluded, it was the “proverbial people.”

2020 election, Here’s where the world was headed before the arrival of Donald J Trump, President Donald Trump, WorldTribune.com