Here’s not looking at you: Survey finds most millennials prefer online communications

For a generation whose mobile devices have become appendages, texting is the preferred method of communication over actual face-to-face conversation, a survey found. 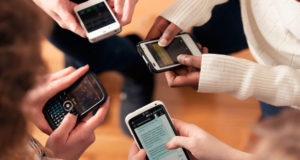 A LivePerson survey of 4,000 18- to 34-year-olds found that “The vast majority of millennials and younger adults (Generation Z) in England, Germany, Australia, Japan, France, and the U.S. said they’d rather talk to someone online than in person.”

The survey also revealed that “70 percent sleep with their phone within arm’s reach and 65 percent admitted to using their mobile device while in the bathroom.”

Rurik Bradbury, LivePerson’s Global Head of Communications and Research, noted that “What we see in the research data is the phone truly becoming an extension of the self, and the platforms and apps within it – digital life – occupying more than their offline interactions.”

In the U.S., “nearly 74 percent of respondents would rather send a text message instead of having a conversation in person,” reported CBS News, adding that “62 percent said they’d rather leave their wallet at home than forget their phone.”

A recent survey by One Poll of 2,000 young Americans (18 or older), found 65 percent of millennials don’t feel confident in face-to-face social interactions. The survey also found that 30 percent of millennials cancel or just don’t go to events they’re invited to because they fear it will be socially awkward.

Eight in 10 of the young people surveyed reported feeling more comfortable having a conversation via text message or online.

Other recent polls have shown that millennials are having less sex and 25 percent of UK millennials said they would date a robot.