A judge in Colorado has ruled that attorney Sidney Powell will not be allowed to argue her own case in a defamation lawsuit filed against her by former Dominion Voting Systems director of security and product strategy Eric Coomer. 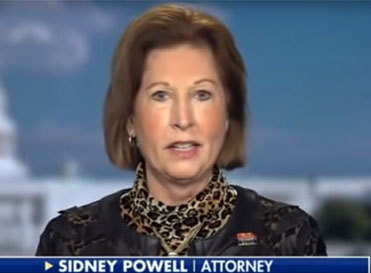 Powell noted in a Telegram post on Friday: “We are in state court now in Denver in Eric Coomer’s defamation case against me and DefendingTheRepublic and many others. Yesterday morning, Coomer and the judge agreed I could argue the case myself. Then the court received two media requests — including one to have a video camera in the courtroom. After lunch when I was supposed to argue, Coomer counsel decided they objected. The judge immediately agreed with them and ordered that I cannot argue my own case.”

Powell added: “My counsel argues this morning. The judge did not activate the online access that is available to the court. It may be that one radio station is carrying it. Court starts at 8 a.m. in Denver.”

Former Tech CEO Joe Oltmann, who is also being sued by Coomer, wrote on Telegram:

“Sidney Powell is being nice here. The judge is afraid of Sidney because she is a truthful, ethical and powerful woman. She is a woman of faith and conviction. A stark contrast to the unethical, embarrassment sitting on the bench. I will not be in court today but I will be praying for the others there. Please pray for them.”

Meanwhile, Uncover DC noted in an Oct. 12 report that Fulton County, Georgia paid Dominion $2 million, or $2,000 per person per day, to staff and run the 2020 election.

“Not only did Dominion sell Georgia the voting systems for the entire state, but they also literally ran the election,” Kevin Moncla’s report noted.

From the audit report:

“We sampled invoice files for transactions that occurred during the scope of our audit and noted the department did not maintain records for professional services, including overtime, totaling $1,965,260. Management informed us that the verbal agreement between Fulton County and the vendor for these professional services was $450K; however, Fulton County was billed four times that amount. Subsequently, the department possessed no verifiable means (i.e., timesheets) of onsite support that could be used to validate the invoices submitted for payment.”