Here come the Millennials: Progressives lost the battle, but are winning the war

The 2016 election may go down as a repudiation of progressive and dynastic politics, it may be seen as a backlash to eight years of non-majoritarian “transformation,” or it may be seen as a rejection of Obama’s legacy of “big government.” Whatever the final verdict when the dust finally settles (if it is even allowed to settle), conservatives better take note of one important demographic that voted in this election: the Millennials.

The 18-25 year group may be the most progressive-oriented cadre to ever march into a voting booth. Soon, very soon they will be taking their rightful seats in positions of leadership and power. And unless their views somehow soften or “leak” rightward, we are in for a big surprise in future elections. 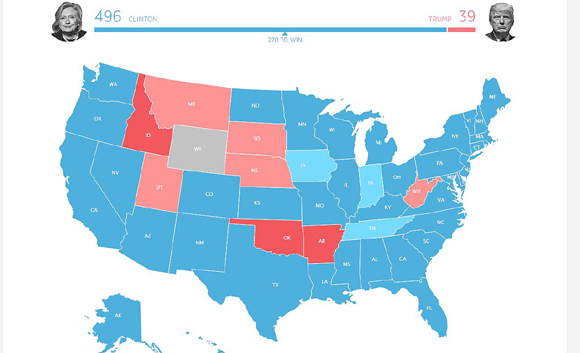 But that was the total vote — all voters. Take a look [at the accompanying map] at how the Millennials said they would vote.

If millennials had been the only ones voting on Nov. 8, and those who said they were going to vote in fact did so, Clinton would likely have won the Electoral College 496 to 39, says Survey Monkey. …If our fate were in the hands of the Millennials, a different half of the country would be celebrating right now.

Now, this … map is a little misleading because a whole bunch of those millennials apparently stayed home, perhaps out of laziness or perhaps falsely thinking Clinton “had it in the bag.”

Regardless, the lesson to be drawn from this is that an entirely new cadre of voters is already active in the polity. Soon they will dominate the voting, and unless something drastic happens, they will ensure the Democrat Party’s dominance for many, many years.

Why are millennials across the nation so uniformly progressive? Simple: they’ve been taught to be so. The overwhelming majority of these young adults were educated in the public school system.

There they were taught the values of progressivism: secular humanism, socialism, historicism, statism, environmentalism, evolution, and social contract theory. They’ve been taught a purposefully distorted worldview: one steeped in racism, conquest, colonialism, exploitation of resources, “evil” capitalism, you get the picture.

If you doubt the effect of public education on the worldview of today’s youth, please consider the result of 30 years of data collection by the Nehemiah Institute. Through an instrument called the PEERS Test, they have been measuring the worldview of Christian children since the 1980s.

Alarmingly, Christian children attending Christian schools are also trending towards a socialist worldview as well. This suggests there is a cultural component to this as well, but the effect of public schools is unmistakable, and the trend is not good.

While progressive values might have been only tepidly taught in grades 1-12, the kids get the “firehose treatment” when they enter college. Hence: the “snowflakes.”

We may dismiss the snowflake phenomenon as nothing more than delayed adolescence, but it appears the phenomenon has staying power. And unless there is some group out there that has taken it upon themselves to grab these kids by the shoulders and shake them into the real world, the “snowflakes’” worldview is unlikely to change much. Their values are pretty set. We may see only minor adjustments as they encounter opinions in the “real world” that diverge from their own. Right now, they believe that the way they see the world reflects reality because their peers and teachers affirm that view.

While some analysis of the views of millennials has been conducted, the findings are very superficial: they don’t dig very deep into specific policy positions or why the millennials hold to those views. …

While seventy-seven percent of millennials can’t name even one of their state’s two senators, this doesn’t keep them from voting. They support same-sex marriage, marijuana legalization, abortion on demand, relaxed immigration controls, greater gun control, and activist government.

Do they understand the principles upon which this country was founded, the principles embedded in the Declaration of Independence, the contending positions expressed at the Constitutional Convention? While I don’t find any studies that have assessed this, my personal experience says: no.

We simply must find a way to engage the millennials in reasoned discussion and debate before it is too late. If we don’t set this as a priority over the next 4-8 years, progressive policies will become firmly entrenched in the American polity. Once the Boomers have passed on, America will be in new hands. That should worry you.

Gary Porter is Executive Director of the Constitution Leadership Initiative, Inc., a project to inform Americans about the Founder’s view of their Constitution. Comments on this essay and ideas for future essays should be sent to constitutionlead@gmail.com.

but are winning the war, Here come the Millennials: Progressives lost the battle, WorldTribune.com