For a political party that likes to talk about reigning in Wall Street and “getting money out of politics,” the Democrats sure like Wall Street cash. 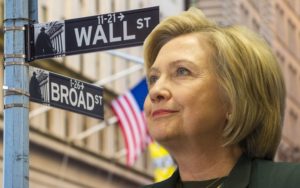 To say that hedge fund donors, for example, are heavily favoring Hillary Clinton over Donald Trump in the 2016 presidential race is a mammoth understatement.

According to a Breitbart report on donations by hedge fund owners and employees, Clinton has been the recipient of some $123 million in political donations this election cycle, compared to just $19,000 for Trump from that same segment of donors.

The review found that Clinton’s top five donors are owners or employees of investment firms, and seven such firms have contributed up to $48.5 million to her.

During her acceptance speech at the Democratic National Convention, Clinton again pledged to appoint Supreme Court justices “who will get money out of politics.” If necessary, she said, “we’ll pass a constitutional amendment to overturn Citizens United!”

The Supreme Court’s 2010 Citizens United ruling helped ensure the ability of people and corporations to make political donations to whomever they wish, classifying such donations as covered by the First Amendment.

In the past, Clinton has declared that the right to free political speech has had a “pernicious effect” on the country.

Those comments came from the same person who made more than $21 million delivering closed-door speeches to dozens of big banks, hedge fund companies, and investment firms.

According to The Wall Street Journal, the amount given to Clinton by the hedge fund sector is more than twice what they gave in 2012 and accounts for 14 percent of all money donated to her so far.

The hedge fund sector has given to Republican candidates, but the Journal pointed out that hedge funders who have given to the GOP have picked candidates who opposed Trump.