Having won control of U.S. government, Left out to eliminate alternative media

In March, for the third time in five months, Democrats will summon the CEOs of social media companies to Congress, where the Democrats plan to again demand that Big Tech increase its censorship of alternative media.

“Not even two months into their reign as the majority party that controls the White House and both houses of Congress, key Democrats have made clear that one of their top priorities is censorship of divergent voices,” independent journalist Glenn Greenwald charged in a Feb. 23 analysis.

But, Greenwald noted, the Democrats intend to go even further than an increase in censorship. They now have their “sights set on the removal of conservative cable outlets, including Fox News, from the airwaves.”

The House Energy and Commerce Committee on Monday announced a Feb. 24 hearing, convened by one of its sub-committees, entitled “Fanning the Flames: Disinformation and Extremism in the Media.” Claiming that “the spread of disinformation and extremism by traditional news media presents a tangible and destabilizing threat,” the Committee argues: “Some broadcasters’ and cable networks’ increasing reliance on conspiracy theories and misleading or patently false information raises questions about their devotion to journalistic integrity.”

Greenwald noted: “Since when is it the role of the U.S. Government to arbitrate and enforce precepts of ‘journalistic integrity’? Unless you believe in the right of the government to regulate and control what the press says — a power which the First Amendment explicitly prohibits — how can anyone be comfortable with members of Congress arrogating unto themselves the power to dictate what media outlets are permitted to report and control how they discuss and analyze the news of the day?”

California Democrat Reps. Anna Eshoo and Jerry McNerney, two senior members of House Energy and Commerce Committee, sent letters (see below) to seven of the nation’s largest cable providers — Comcast, AT&T, Spectrum, Dish, Verizon, Cox and Altice — as well as to digital distributors of cable news (Roku, Amazon, Apple, Google and Hulu) demanding to know, among other things, what those cable distributors did to prevent conservative “disinformation” prior to the election and after — disinformation, they said, that just so happened to be spread by the only conservative cable outlets: Fox, Newsmax and OANN. 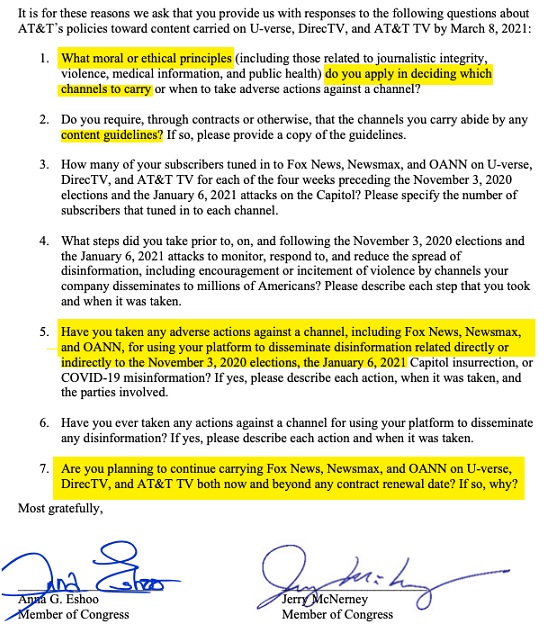 Greenwald pointed out: “There is not a peep of protest from any liberal journalists. Do any of the people who spent four years pretending to care so deeply about the vital role of press freedom have anything to say about this full frontal attack by the majority party in Washington on news outlets opposed to their political agenda and ideology?

“Evidently not. While many conservative outlets are covering this story, it is difficult to find any liberal outlets writing about it at all. An article from The New York Times was one exception, though it largely attempted to justify these censorship efforts, with paragraph after paragraph purporting to demonstrate the dangerous misinformation spread by these channels. The only nods to the dangers of press freedoms in the article came from statements by Fox News and a GOP member of the Federal Communications Commission (FCC).”

In a publicly posted statement, FCC Commissioner Brendan Carr denounced the Democrats’ actions as a “marked departure from First Amendment norms.” He said “it is a chilling transgression of the free speech rights that every media outlet in this country enjoys.”

Carr added in a separate statement to Greenwald: “The greatest threat to free speech in America today is not any law passed by the government — the First Amendment stands as a strong bulwark against that form of censorship by state action. The threat comes in the form of legislating by letterhead. Politicians have realized that they can silence the speech of those with different political viewpoints by public bullying. The letter sent by two senior Democrats on the House Energy and Commerce Committee to cable companies and other regulated entities, and the Committee’s own hearing this week on ‘disinformation in the media,’ are the latest examples. They are singling out selected newsrooms for their coverage of political events and sending a clear message that these media outlets will pay a price if they do not align their viewpoints with Democrat orthodoxy. That is a chilling transgression of free speech and journalistic freedom. No government official has any business inquiring about the ‘moral principles’ that guide a private entity’s decision about what news to carry.”

Greenwald concluded: “Corporate media outlets and Democrats (excuse the redundancy) who spent the last four years posturing as virulent defenders of press freedoms never meant it. Like so much of what they claimed to believe, it was fraudulent. The proof is that they are now mute, if not supportive, as Democrats use their status as majority party to launch an assault against press freedoms far more egregious than anything Trump got close to doing.”