The way the far left and media seem to be rejoicing over the collapse of the stock market due to the coronavirus confirms without a doubt, the radical Dems and their partners in the mainstream media would rather have President Donald Trump fail/impeached even if it meant his success would improve the lives of all Americans.

This is a hatred/vendetta that the vast majority of responsible Americans including myself, cannot comprehend. Only the radical left hate like that. They are the true enemy within because Russia could not want America’s destruction more! 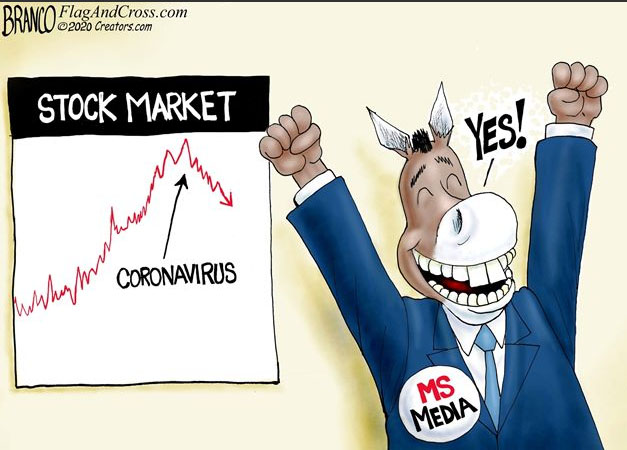 I believe that if our country suffered another major depression similar to the crash of 1929 under President Trump, I have no doubt, the far left and media would be cheering. They could care less about the welfare of the average American they just want him out. My question is could this hysteria by the radical socialists, which have taken over the Democratic Party, lead to another civil war in our country? I feel the possibilities are certainly there not only because of their evil vendetta but because they are supported by the Mainstream media who gleefully communicates and supports their hatred.

I have never witnessed a situation such as this and did not think it was possible in America. I had no idea elements of our population were capable of this.

The far left politicians lie and the main stream media swear to it. As I have stressed throughout my book: Political Correctness is Total BS in the history of America I had no idea this was possible because I was under the false impression that all Americans realized that America was and is the greatest country and the envy of the world.

I have a recommendation to help bring America back. First Term limits! I believe under the current environment, if not corrected, we as a nation will continually decline. The problem is the good old boys in Washington will never vote in favor of it. It’s like a Mafia boss voting to take away his money and power and go back on the street. The special interest money alone would cost them a fortune.

America don’t be deceived; It’s all about their power and money! They are there to benefit themselves not ‘we the people’!! Be 100% sure of that!! So if possible we should investigate starting a class action law suit against these villains. I know presently, under our laws and Constitution it’s not a possibility and if not change the law. Remember the far Left in Washington want to change and eliminate the Electoral College for their benefit so my idea is create a class action law-suit, by changing the law, to force term limits to benefit ‘we the people’ from these self-serving hypocrites.

I want to end this article by expressing my grave concerns with our so called “unbiased” mainstream media. They have become anything but unbiased and mainstream. They are now far left stream. They appeal to a far left group whose intentions are to destroy our democratic republic and change everything our founding fathers and our country has stood for. We are the envy of the world and that is why so many millions of immigrants risk their lives to live here. If this does not change dramatically and we continue to be a hopelessly divided country against an elected President our ability to function as a democratic democracy may be in jeopardy and a civil war may be in our future. Don’t laugh if things don’t change. It could happen!

Be 100% assured of one thing: The far left Washington insiders are not serving “We the people.” They only serve themselves and their wallets!! That is a proven fact because of their dramatic increase in net worth while “serving we the people” in office! Example: Bernie Sanders never had high paying job in his career and now, serving in Political Office is worth millions. There are many more examples! Check it out!!

Wake Up America before it’s too late!!!!