Hate crimes are most likely to be committed in traditional blue states, according to newly released FBI data. 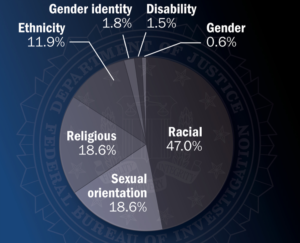 Florida, with the fourth-largest population in the nation, had 72 total hate crimes reported in 2015.

A total of 2,125 offenses were committed against blacks while whites fell victim in the second largest hate crime demographic slot, with a total of 734 offenses. Hispanics suffered 379 offenses.

The FBI report said that Jewish Americans (695) saw more than double the hate crimes against them compared to Muslim Americans (301).

For Americans with disabilities, physical and mental, hate crimes decreased from 2014 with 88 offenses, compared to the previous 95.