Of the 38 million Americans who own handguns, 9 million carry a loaded firearm at least monthly and 3 million do so every day, according to a study by Harvard University and the University of Washington. 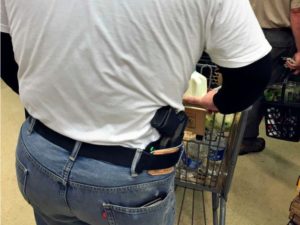 The study, published in the American Journal of Public Health, found:

Washington Examiner columnist Paul Bedard noted that “Recent shootings and concerns about terrorism have driven a surge in Americans obtaining their concealed carry permit and pistols. The rush has been especially noticeable among women and African Americans.”

Justin Anderson, the marketing director of Hyatt Guns in Charlotte, North Carolina, told Bedard the current political and legal climate in the nation plays a role.

“More importantly is the overall atmosphere in the country. I have never seen a more divided nation. That division breeds fear and fear has always been a driver of increased gun sales. In addition, you have terrorist incidents, uncertainty about North Korea, mass shootings, and threats of violent crime.”