Donald J. Trump sent out Easter good wishes on Sunday in his own indomitable fashion. 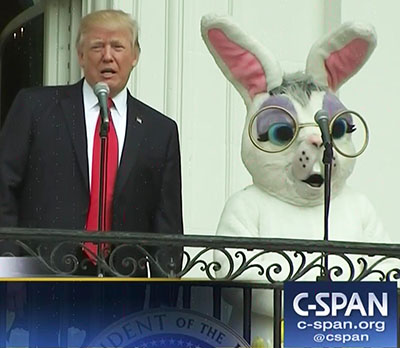 “​Happy Easter to ALL, including the Radical Left CRAZIES who rigged our Presidential Election, and want to destroy our Country!​” Trump said in a statement.​

The former president’s statement came a day after he called for his supporters to boycott Major League Baseball, Coca Cola, and Delta over their criticism of the new voter integrity law passed by Georgia’s Republican-led legislature.

Major League Baseball announced it was pulling ​this summer’s All-Star game out of Atlanta.

“Baseball is already losing tremendous numbers of fans, and now they leave Atlanta with their All-Star Game because they are afraid of the Radical Left Democrats who do not want voter ID, which is desperately needed, to have anything to do with our elections,” ​a statement from Trump on Saturday said.​

“Boycott baseball and all of the woke companies that are interfering with Free and Fair Elections. Are you listening Coke, Delta, and all!​,” he continued.

Meanwhile, a video of the pastor of the Cave of Adullam Church in Calgary, Canada went viral after he lambasted police who, without a warrant, interrupted his church service during Holy Week.

“Out!” Pastor Artur Pawlowski could be heard yelling repeatedly at officers who entered the church.

Pawlowski tells the police: “Nazis are not welcome here! Do not come back you Nazi psychopaths. Unbelievable sick, evil people. Intimidating people in a church during the Passover! You Gestapo, Nazi, communist fascists! Don’t you dare come back here!”

“Can you imagine those psychopaths? Passover. The holiest Christian festival of the year and they’re coming to intimidate Christians during the holiest festival? Unbelievable.” he continued.

The pastor added that the government of leftist Prime Minister Justin Trudeau is conducting a total takeover with “their thugs.” He said that the police officers came to the church armed with guns, tasers, and handcuffs.

“They want to enslave us all like the Egyptians did. They want to be Pharaohs today, that’s what they’re doing,” Pawlowski said.

Pawlowski called on Canadians to “rise up” or else the total covid lockdown and travel ban that is happening in Germany will also happen in Canada. He added that if you are not vaccinated “like a dog or a cat” you won’t be able to go to school, work, or buy and sell products.

“Is that the future you want?” the pastor continued. “Is that what you want for your children or your grandchildren?”