“Few in authority have been more wrong, and yet more self-righteously wrong, than the esteemed Dr. Anthony Fauci,” historian Victor Davis Hanson noted in a July 5 column for American Greatness.

Fauci’s long tenure as the director of the National Institute of Allergy and Infectious Diseases and his stature during the AIDS crisis led to his becoming the U.S. government’s gold standard of coronavirus information. 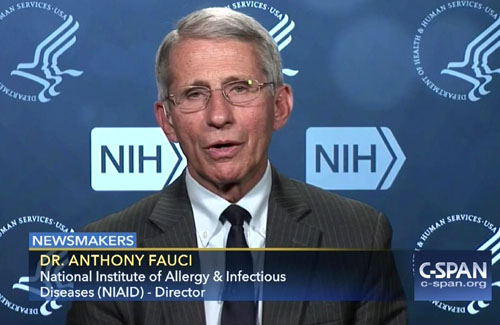 The major media, Hanson wrote, “has constructed Fauci as a constant corrective of Trump’s supposed ‘lies’ about the utility of travel bans, analogies with a bad flu year, and logical endorsement of hydroxychloroquine as a ‘what do you have to lose’ possible therapy.”

“But the omnipresent Fauci himself unfortunately has now lost credibility. The reason is that he has offered authoritative advice about facts, which either were not known or could not have been known at the time of his declarations.”

Since January, Fauci had said early on that the coronavirus was unlikely to cause a major health crisis in the United States. He then shifted gears and said it might kill 240,000 Americans.

In January, he praised China for its so-called “transparent” handling of the outbreak. Soon after, he conceded that the communist nation may have done a poor job of handling the crisis.

“He has cautioned that the virus both poses low risks and, later, high risks, for Americans,” Hanson noted. “Wearing masks, Fauci warned, was both of little utility and yet, later, essential. Hydroxychloroquine, he huffed, had little utility; when studies showed that it did, he still has kept mostly silent.”

At various times, Fauci “emphasized that social distancing and avoiding optional activities were mandatory, but earlier that blind dating and going on cruise ships were permissible,” Hanson noted. “Fauci weighed in on the inadvisability of restarting businesses prematurely, but he has displayed less certainty about the millions of demonstrators and rioters in the streets for a month violating quarantines. The point is not that he is human like all of us, but that in each of these cases he asserted such contradictions with near-divine certainty — and further confused the public in extremis.”

In terms of how the United States has “fared” in its reaction the outbreak, Hanson noted “it is simply untrue that Europe embraced superior social policies in containing the virus. The only somewhat reliable assessments of viral lethality are population numbers and deaths by COVID-19, although the latter is often in dispute.”

Hanson continued: “By such rubrics, the United States, so far, has fared better than most of the major European countries — France, Italy, the United Kingdom, Spain, Sweden, and Belgium — in terms of deaths per million. Germany is the one major exception. But if blame is to be allotted to public officials for the United States having a higher fatality rate than Germany, then the cause is most likely governors of high-death, Eastern Seaboard states — New York, New Jersey, Massachusetts, and Connecticut in particular. They either sent the infected into rest homes, or did not early on ensure that their mass transit systems were sanitized daily as well as practicing social distancing.”

New York Gov. Andrew Cuomo, “more than any other regional or national leader, is culpable for decisions that doomed thousands of elderly patients. He did not just suggest long-term-care facilities receive active COVID-19 patients, but ordered them to take them — knowing at the time that the disease in its lethal manifestations targeted the elderly, infirm, and bedridden. Then in shameful fashion, after thousands died, Cuomo claimed that either the facilities themselves or Donald Trump were responsible for the deaths.”

Why are there currently spikes in cases among young people in warmer states and those of less population density in late June?

“No one is certain,” Hanson wrote. “But one likely reason is that millions of protestors for nearly a month crammed the nation’s cities, suburbs, and towns, shouting and screaming without masks, violating social distancing, and often without observant hand washing and sanitizing — most often with official exemption or media and political approval.

“The period of exposure and incubation is over, and the resulting new cases — for the most part asymptomatic and clustered among the young — are thus no surprise. Still, what is inconvenient is the rise in these cases — given that the Left either had claimed its mass demonstrations would not spread the disease, or, if they would, the resulting contagion was an affordable price to pay for the cry of the heart protests.”

Hanson continued: “The truth is that the COVID-19 epidemic, the lockdown, and the rioting were seen by the Left, the media, and now the Democratic Party as a renewed effort in this election year to do what Robert Mueller, Ukraine, and impeachment had not—abort the presidency of Donald Trump, or make it impossible for him to be re-elected.

“The brand of all cultural revolutions is untruth about the past and present in order to control the future. Why we have let this happen to our country is the only mystery left.”