Hanson on new virtual reality: If the media says so, it must be false

There is no doubt that the coronavirus response of Florida Republican Gov. Ron DeSantis has been significantly more effective than that of Democrat New York Gov. Andrew Cuomo.

But, in characterizing DeSantis as a pandemic villain and Cuomo a shining hero, the major media have ignored the facts. In the age of Trump and COVID the “Doctrine of Media Untruth” reigns, a columnist noted. 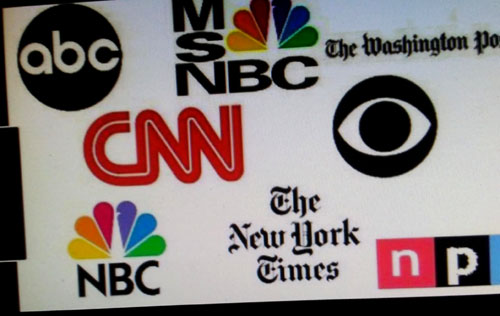 “As a general rule, when the New York Times, the Washington Post, National Public Radio, Public Broadcasting Service, NBC, CBS, ABC, MSNBC, and CNN begin to parrot a narrative, the truth often is found in simply believing just the opposite,” columnist and historian Victor Davis Hanson noted in a May 24 op-ed for American Greatness.

Florida and New York have large numbers of retirees and long-term-care homes. Yet, New York’s nursing homes have been devastated by coronavirus as a direct result of Cuomo’s orders. DeSantis, on the other hand, made early efforts during the pandemic to focus on nursing homes which resulted in far fewer COVID-19 deaths.

But, Hanson noted, “One would never know from the media of the contrasting fates of the two states during the epidemic. DeSantis is often rendered little more than a reckless leader who exposed Floridians to needless danger. Cuomo, in contrast, increasingly is deified by the media as likely presidential timber who finesses press conferences in the lively fashion of his legendary beloved father, and iconic liberal, Mario Cuomo.”

Hanson continued: “Yet on the principle of media’s commitment to untruth, the public legitimately could deduce from the hagiographic news coverage that the frenetic Cuomo has proven the most incompetent governor in the nation in dealing with the virus. He sent the infected into vulnerable long-term care homes. He neither applied social distancing to, nor cleaned, mass transit. And Cuomo exaggerated his need for some medical supplies, while neglecting shortages in others.

“In contrast, the media furor at DeSantis is a good guide to his successes in both mitigating viral fatalities while charting Florida’s path back to economic normality.”

“The media assures us that failed Georgia gubernatorial candidate Stacey Abrams is a statuesque heroic figure who is an experienced state politician, a successful polymath, and would be a valuable asset as Joe Biden’s vice-presidential pick, but even better — wink-and-nod — a likely next president.

“That new media consensus narrative is best typified by a recent and obsequious promo piece in the Washington Post. So given the media deification and the Doctrine of Media Untruth, we might assume that Abrams never has held statewide office, in incoherent fashion could not concede her legitimate defeat in the last Georgia gubernatorial race, and until recently still had not paid off an enormous credit card, student, and tax debt well over $200,000.”

“In other words,” Hanson wrote, “read the media narrative on Abrams and without knowing much else, one could conclude that she is not a photogenic candidate; she is not gracious in defeat; and she is without much experience of victory. Her baggage and lack of even a statewide constituency would mostly hurt a Biden ticket, which explains why his opponents hope that she is the vice-presidential nominee.”

Then There Is Adam Schiff

The country “once knew little” of the California Democratic representative. “But once the media sanctified his role after the 2018 election as the chairman of the House Intelligence Committee, we knew what lay ahead,” Hanson wrote. “No sooner had the Renaissance Schiff assumed the chairmanship of the committee than we were lectured ad nauseam how he was a Harvard Law graduate, with a sly sense of humor, who had he not blessed the country with his stellar political career otherwise might well have been a successful Hollywood screenwriter. He ran his committee with flair and competence lacking under the former chairman, the supposedly plodding dairy farmer Devin Nunes (California Republican). In other words, we quickly discovered the truth through the Doctrine of Media Untruth.”

Within about a year, Hanson noted, “the public knew that Schiff was a fraud. He had suppressed key testimonies that long ago revealed that the functionaries in the collusion hoax had admitted under oath they had no evidence for the accusations they made daily in the media, and that CrowdStrike, in fact, could not prove a Russian genesis for the hacking of DNC emails.”

Schiff “lied habitually, most egregiously in denying that he or his staff had anything to do with the Ukrainian ‘whistleblower’ when in fact his team had been in close communications with him.”

Back to the Coronavirus

“Nowhere has the Doctrine of Media Untruth been more helpful than in following Trump during the coronavirus epidemic,” Hanson wrote. “The media fixated on hydroxychloroquine because Trump said it might be a game-changer and he took it himself as a prophylactic. That ensured that the ubiquitous, long-tested, mostly safe, and cheap anti-malarial, anti-lupus household drug would suddenly be declared useless and deadly.”

Would the corporate media “ever repent and empirically report that in some cases hydroxychloroquine is considered to be efficacious in treating the early symptoms of the disease by front-line doctors, in line with a series of pre-COVID-19 studies that it could be helpful against SARs-like viruses?

“If tomorrow Barack Obama gave a press conference, and should confess that when he travels he takes the drug, given its general safety and scattered reports it might have prophylactic value against COVID-19, we would soon read headlines of a ‘miracle drug’ that is cheap, accessible, and vital to the world’s poor and at-risk,” Hanson wrote.

What about Dr. Anthony Fauci?

“Early on in the COVID-19 crisis, the media consecrated Fauci as the godlike man of science, in antithesis to the buffoonish, pre-Enlightenment fool Trump. If Fauci uttered a truism, it reverberated across the media world as gospel — but also as a sly putdown of the oblivious, oafish president. So, under the Doctrine of Media Untruth, the more the Fauci hallowing grew, the more we knew he had feet of clay,” Hanson wrote.

“The more Fauci was brilliant, prescient and sibyllic, the more we knew that he came late to the danger, had once declared the virus to be not much of a threat, suggested that hook-ups and cruise trips need not be too much derailed by the virus, declared that opening up locked-down states would be a terrible idea, fueled wild modeling estimates of several hundreds of thousands soon to die from the virus, doubted the efficacy of masks, and warned we should not expect an effective vaccination for years.

“In other words, under the Doctrine of Media Untruth, the more Fauci was turned into a god and an anti-Trump avenging angel, the more he was human and not especially any more prescient medically than Trump was politically.”

Hanson continued: “The hatred of Donald Trump explains some, but not all, media bias. During the Obama years, a media cohort came of age assuming that the hip, young, educated, urban classes like itself were in permanent ascendance. It did not need to worry about listening to others, venturing beyond coastal corridors, or questioning whether it was really educated or merely branded with mostly mediocre degrees.

“Trump’s antics simply lured the snails out of their shells and showed the public they were glorified slugs all along.”