The FBI appears to be pursuing protesters who were at the Jan. 6 breach of the U.S. Capitol with much more zeal than when investigating/prosecuting its own abuses during the Trump-Russia collusion witch hunt.

Using all the tools at its disposal, including the latest in facial recognition technology, the FBI has now charged more than 400 Americans with crimes tied to the Jan. 6 event, according to Department of Justice records. 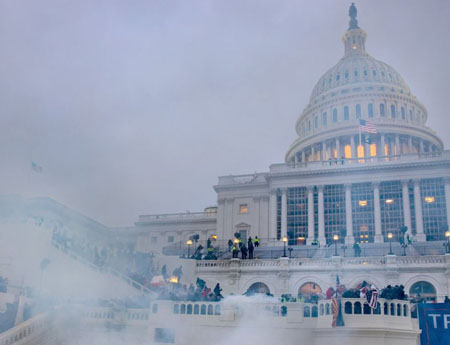 That technology was used in the case of Stephen C. Randolph of Kentucky, who is now one of the 423 defendants charged in the Capitol breach, DOJ documents show.

After using the facial recognition technology to nail Randolph’s identification, the FBI then went undercover to try to obtain incriminating statements, Rowan Scarborough noted in an April 25 report for The Washington Times, citing a DOJ affidavit.

“The FBI may have used biometric technology, perhaps classified systems, to identify other Capitol suspects but did not disclose the use in court documents,” Scarborough noted.

Scarborough details the great lengths the FBI went to in its pursuit of Randolph, who allegedly was one of 800 protesters to enter the Capitol building on Jan. 6:

The FBI first Randolph’s photo — No. 168, unmasked in a gray beanie — along with 10 other protesters on one of its “seeking information” public lists.

“Assault on Federal Officers and Violence at the United States Capitol,” the list was headlined.

On Feb. 2, Randolph’s photograph popped up on a Twitter account, @SeditionHunters, which showed him in a black jacket and gray turtleneck. Headline: “Do You Know This Person?”

In addition, an Instagram screen shot “shows the subject physically confronting [U.S. Capitol Police] officers and specifically shows the subject falling to the ground and his grey toboggan is beginning to come off his head,” the affidavit states. The scene also was found in a YouTube video.

FBI agents determined that all images were of the same person.

Next came technology. “Using an open source facial comparison tool, known to provide reliable results in the past, the FBI submitted photograph [in the FBI bulletin] due to it being a clear, straight-on photograph of subject,” the affidavit states.

Agents got a match.

The app took them to an Instagram page under the account of Mr. Randolph’s girlfriend. There they found him in numerous photos. In one group photo, he is wearing the same gray beanie seen in Capitol images. He is identified as “Stephen.”

“A check of Kentucky Driver’s License records for STEPHEN CHASE RANDOLPH provided a photograph which appears to be the same individual as the SUBJECT described above,” the FBI said.

On March 3, agents followed Randolph from his home to his job. He was wearing the same gray beanie and black jacket he wore in Washington on Jan. 6. The agents photographed Randolph standing outside his place of employment.

Randolph described the mob scene and said, “I was in it” and “It was f—-ing fun.”