A Georgia congressional candidate says she has no plans to back down to House Speaker Nancy Pelosi or the so-called “Squad” of socialist Democrats after Pelosi called one of the candidate’s campaign posts featuring the “Squad” a “threat of violence.” 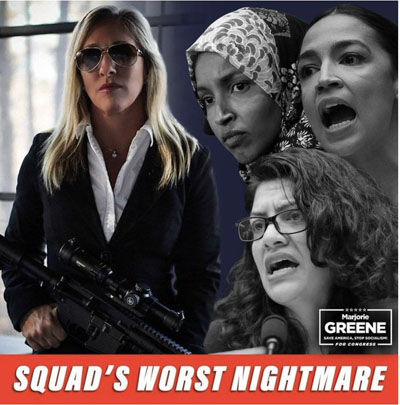 Marjorie Greene, who often touts her Second Amendment rights by displaying firearms in her campaign ads, calls herself the “Squad’s worst nightmare” in a Facebook post featuring Greene holding an AR-15 and images of Reps. Alexandria Ocasio-Cortez, Rashida Tlaib and Ilhan Omar.

Greene responded: “Actually Nancy, we need to remove you from Congress. Congressman Steve Scalise was shot by a left-wing terrorist, and the next day you blamed Republicans. Senator Rand Paul was hounded by a BLM / ANTIFA mob last week and could have lost his life.”

Omar called on Facebook to remove Green’s post, tweeting: “Posting a photo with an assault rifle next to the faces of three women of color is not advertising. It’s incitement.”

Greene responded: “Relax @IlhanMN, it’s just a meme. What isn’t a meme is BLM / ANTIFA violence, rioting, and destruction that occurred on Minneapolis streets. While your city was being burned and innocent people of color like David Dorn were killed, you called BLM / ANTIFA peaceful protesters.”

Greene is likely to win in November in Georgia’s heavily Republican 14th Congressional District. She has been endorsed by President Donald Trump and attended his Republican National Convention acceptance speech at the White House.

Greene recently told Washington Examiner columnist Paul Bedard: “I ran for office to expose, confront, and defeat the radical left. I scare them so much, they’re trying to cancel me out even before I’ve been elected. But like President Trump, what they say about me is what they think about you. These socialist radicals will never defeat this American woman. And I will continue fighting to Keep America Great.”