Instead of building President Donald Trump’s border barrier, researchers at a Purdue University-led national consortium of engineers and scientists have proposed a 1,945-mile alternative security zone along the U.S. southern border.

What the consortium says would be the largest infrastructure project in world history would consist of a string of energy panels, wind turbines and gas pipelines along the border, bookended by desalination plants. 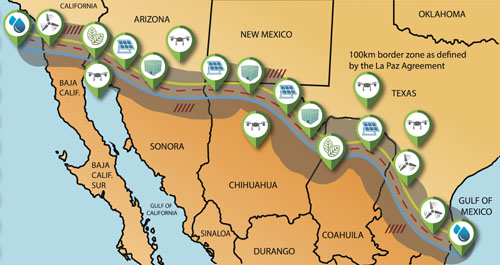 And the project would “pay for itself,” according to the consortium, which includes 28 engineers and scientists from across the nation.

“It would do for the southwest what the Tennessee Valley Authority has done for the southeast over the last several decades,” said Luciano Castillo, Purdue University’s Kenninger Professor of Renewable Energy and Power Systems, and lead of the consortium.

The consortium said the project would be an “economic driver, both in the construction of the facilities themselves and in the businesses that would be attracted to the region by cheap electricity.”

And, it could get easy approval from Trump, who the consortium says in private meetings has talked up such a plan and its potential for “beautiful structures.”

“All utility plants, pipelines and other energy production facilities have security – as any infrastructure will have under any conditions,” he said. “In addition to physical security features, such as multiple levels of fencing, these pipelines and facilities would also have electronic sensors and drone surveillance. This would allow areas for wildlife to continue to migrate while alerting officials to anyone crossing the border illegally.”

Ronald Adrian, Regents’ professor at Arizona State University and a member of the National Academy of Engineering said that “At first blush the idea seems too big, too aggressive, but consider the Roman aqueducts or the transcontinental railroads – enormous undertakings that gave enormous benefits. The cost of providing basic, essential infrastructure to the border lands is tiny compared to the opportunities it creates.”