The Green New Deal championed by socialist Rep. Alexandria Ocasio-Cortez and most of the 2020 Democratic presidential hopefuls would impose around $75,000 in average costs for households in key battleground states, according to a new study.

“The Green New Deal would effectively destroy America’s energy industry, and with it, our entire economy,” said Daniel Turner, the executive director of Power the Future, which partnered with the Competitive Enterprise Institute (CEI) on the project. 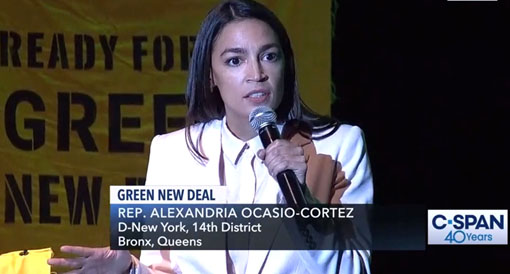 “Right now, our booming national economy and record low unemployment rate is driven by abundant, domestic, reliable, and inexpensive energy produced by millions of men and women across the country,” Turner said. “Any policy that proposes to reverse this success is a threat to jobs, to rural communities, to national security, and to the very prosperity that Americans are experiencing.”

The Competitive Enterprise Institute (CEI) and Power the Future reported on Feb. 26 that the Green New Deal, in its first year, would cost households an average of between $74,287 and $76,683 in 10 states.

CEI said those figures incorporate costs from Green New Deal mandates, including the cost of electricity production within the first year of the program, a one-time upgrade to vehicles and housing, as well as shipping and logistics costs.

The study found that while the costs for each of the states declined in the following years, they all faced more than $39,000 in average annual household costs in the long term (six years or more).

Florida would face $700 billion in collective costs to fulfill the Green New Deal’s goal of transitioning towards electric vehicles, retrofit residential buildings, and complying with changes to shipping and logistics, the study said. Released on Wednesday, the study found that households in other major states — like Ohio, Michigan, and Pennsylvania — would incur roughly $200-$400 billion in initial costs.