Democrats’ effort to create a commission to investigate the Jan. 6 breach of the Capitol was blocked by Republicans in the Senate on Friday. 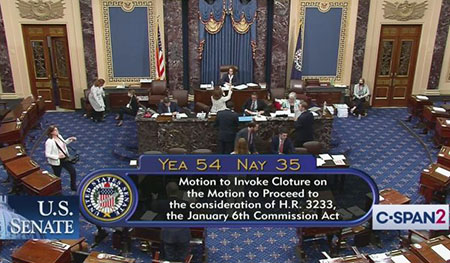 Though six Republicans broke ranks to join the chamber’s Democrats (two did not vote) in favor of the Jan. 6 commission, the vote still fell short of the 60 needed to overcome a filibuster and advance the legislation.

Senate Minority Leader McConnell said of the proposed commission: “I do not believe the additional, extraneous commission that Democratic leaders want would uncover crucial new facts, or promote healing. Frankly, I do not believe it is even designed to do that.”

Republican senators voting in favor of the commission were Susan Collins of Maine, Lisa Murkowski of Alaska, Mitt Romney of Utah, Bill Cassidy of Louisiana, Ben Sasse of Nebraska, and Rob Portman of Ohio.

The GOP filibuster Friday on the Jan. 6 commission means the legislation is likely dead for now.

The Daily Wire noted: “Any fully Democratic effort would also likely focus on both former President Donald Trump and House and Senate Republicans who signaled support for efforts to investigate vote fraud or who voted against certifying state electors, even if Democrats have, in the past, also voted against certifying Electoral College results from certain states in contested elections that went against their own party.”