‘God is not mocked’: Columnist finds Biblical precedents for 2020 crises

While many faithful are heartbroken by what is happening in America, the wicked are “reveling in the madness,” a columnist noted.

“And thus the battle lines have been drawn. Call this God’s winnowing of America — a time when He takes a look at His people, decides He doesn’t like what He sees and allows for a time of great testing to separate the good from evil, the worthwhile from worthless, the usable from unusable,” Cheryl K. Chumley wrote for The Washington Times on June 9. 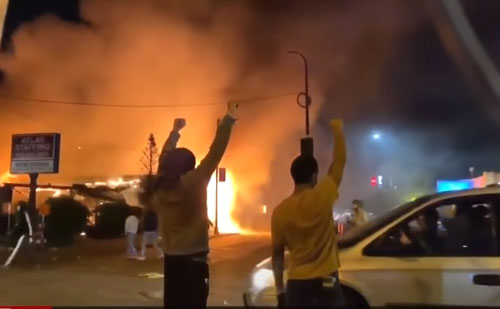 “The coronavirus; the death of George Floyd; the collapse of the U.S. economy; the rise of the thug forces on city streets; the calls for defunding of police, leading to eventual destruction of law and order; the defacement and removal of our nation’s most symbolically important monuments and statues; the widespread looting of businesses; the targeted shootings of police officers; the masking of Americans’ faces; the opening of doors for mass mail-in voting, meaning mass voter fraud that favors the Democrats — these are all instances and examples of strife, struggle, trial and testing the country has faced and continues to face,” Chumley wrote.

President Donald Trump “didn’t start the fire. He simply outed what’s been a burning ember for some time — but such a slow burning ember that its heat has gone largely unnoticed. Or, more to truth, largely ignored,” Chumley wrote.

America opened its figurative doors with a Mayflower Compact that pledged, “for the glory of God and advancement of the Christian faith,” to “plant the first colony” and govern in harmony.

“It was that spirit of self-governance, determination to self-rule and recognition of higher heavenly authority that led to the forging of America’s Declaration of Independence and Constitution,” Chumley noted. “It was that Mayflower Compact influence, and the influences of the Separatists aboard the Mayflower who created our nation’s first governing document, that etched in marble the core facet of America’s greatness: that individual rights are granted by God, and government has no authority to strip them away.”

President John F. Kennedy said at his inauguration that “the rights of man come not from the generosity of the state, but from the hand of God.”

But “God-given isn’t just a blessing,” Chumley wrote. “It’s a responsibility. If Americans want a country where rights come from above, at birth, then Americans must recognize the one from above as leader and act accordingly. But have we?”

In 2017, Anne Graham Lotz, the daughter of worldwide known evangelist Billy Graham, spoke at the National Day of Prayer of the “national sins” — among, pursing false gods; forgetting God as the true source of blessings, including material wealth; living wantonly and wallowing in drugs, sex, alcohol, entertainment, fleshly pleasures; and failing to fear His authority.

“God will not be mocked — particularly by a nation that uses His name as a motto. So here we are, facing times of great stress and testing and tension, nationally and individually,” Chumley wrote.

Luke 3:17, of the coming of Jesus — one of dozens of Bible passages about the concept of God’s winnowing, reads: “His winnowing fork is in his hand, to clear his threshing floor, and to gather the wheat into his granary, but the chaff he will burn with unquenchable fire.”

Spiritually speaking, “this explains the chaos in America — or, more to point, the crumbling of America. What to do? How to deal? It’s the job of the believer to stand fast, and spread the word. The winnowing is always with a purpose of repentance, sanctification and saving,” Chumley wrote.

As 2 Corinthians reminds: Afflictions for believers are only “but for a moment.”