New York mafia boss John Gotti was not a hero.

But “Gotti,” the latest biopic of the notorious kingpin starring John Travolta, paints a different picture. The Italian-American crime lord is depicted as a “family man,” who “did a lot for the community,” according to the real-life footage of crowds in the streets who are seen mourning his death at the end of the movie. Gotti claims to be viciously targeted by the cops and the government. 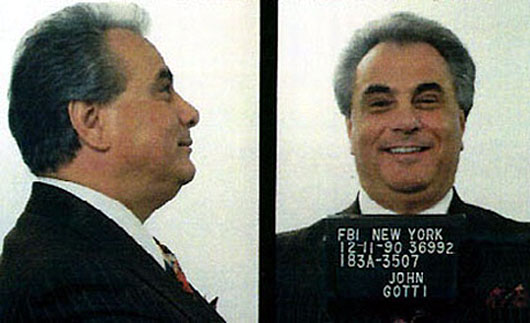 These misconceptions persist despite the fact that in 1992, a jury convicted Gotti of five murders, conspiracy to commit murder, racketeering, obstruction of justice, tax evasion, illegal gambling, drug trafficking, prostitution and extortion. He was sentenced to life in prison, where he died of throat cancer on June 10, 2002.

“Gotti” is based on the 2015 self-published memoir, “Shadow of My Father,” by Gottis’s son, John A Gotti. His son took over the Gambino crime family after Gotti was imprisoned.

At the beginning of the movie, we see John A., played by Spencer Lofranco, visit his father in jail, seeking advice about taking a plea deal.

But like father like son, he too, cries foul and insists he did nothing to warrant criminal prosecution. According to John A., “There was a hell of a lot more honor in the street,” and this is just another government witch-hunt.

Regardless, Gotti berates his son for even contemplating a plea, “If I robbed a church and had a steeple sticking out of my ass, I’d still say I didn’t do it!”

Gotti’s Clintonesque philosophy to “deny, deny, deny,” successfully helped him evade criminal charges in three high-profile trials in the 1980s, earning him the nickname “Teflon Don.” It was later discovered that his acquittals were a result of witness intimidation and jury tampering.

This did not prevent Gotti from becoming a media sensation, hailed for his exuberance and love of fine clothing. “Dapper Don,” as he was also dubbed, embraced the media frenzy.

Despite Gotti’s notoriety, the film had a hard time getting off the ground. It was eight years in the making and went through four directors, 44 producers and a number of supporting actors, including Al Pacino and Joe Pesci.

When it finally premiered the weekend of June 15, it raked in a mere $1.67 million and received a 0% score from Rotten Tomatoes. The New York Times dubbed it a “mess,” The New York Post called it “the worst movie of the year so far,” and Rolling Stone musingly chided that it is an “offer John Travolta should have refused.”

But critics are not disturbed by the glorification of Gotti and mob life.

Rather, they mock director Kevin Connolly — the famous Entourage actor — for unsuccessfully attempting to imitate renowned director Martin Scorsese’s style. They point to lackluster performances by Travolta and his wife Kelly Preston, who plays Gotti’s wife Victoria. They also take issue with the “tacky” soundtrack featuring songs from Pitbull.

Without a doubt, the movie pales in comparison to mobster greats such as “The Godfather” and “Goodfellas.” One of the main reasons is the convoluted script. Scriptwriters Lem Dobbs and Leo Rossi sweep through decades of Gotti’s life, from his ascension to power as the head of the Gambino crime family to his ultimate downfall at the hands of Salvatore “Sammy the Bull” Gravano who colluded with the FBI.

Through a series of flashbacks, the narrative moves from 1979 to 2009, introducing a slew of mobsters who enter and exit the scene faster than audiences can remember their names or their relevance.

The breaking of the fourth wall also proves ineffective, setting a comical tone. In the opening scene, Gotti appears from beyond the grave to give the audience an ominous warning: “This life ends one of two ways: dead or in jail. Me, I did both.”

But Gotti sealed his fate when he pursued a life of crime. He was not an innocent victim unjustly prosecuted, nor was he a man of the people.

Rather, he was a power hungry ruthless killer bent on stuffing his own pockets — regardless of the cost.

“Gotti” is floundering at the box office because it glamorizes the mob king without taking a stance against his vile criminal behavior. Ultimately, the movie fails because it serves the Gotti myth instead of the audience’s craving for justice and punishment of this evil man.

Loredana Vuoto is a columnist for the Boston Broadside, and is a former speechwriter for the Senate Republican Conference and was assistant national editor at The Washington Times.