Giving the devil his due: Satanists raise Valentine’s Day funds for abortion and against Trump

Pro-lifers may be shocked at the appropriateness of the name of The Satanic Temple’s Valentine’s Day fundraiser for its reproductive rights lawsuit against the state of Missouri. It’s called “Hugs and Kisses for Satan”. 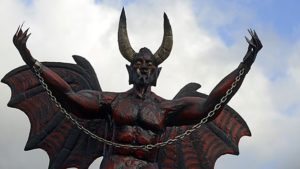 In a Feb. 9 press release, the Temple said it is “seeking sponsors for its Valentine’s Day fundraising drive, ‘Hugs and Kisses for Satan’, which is aimed to support the Temple’s reproductive rights lawsuits against the state of Missouri’s mandatory abortion waiting periods and reading materials that claim life begins at conception. The Temple objects to these State requirements on religious grounds.”

The Satanic Temple says it is based in Salem, Massachusetts.

President Donald Trump’s pro-life stance includes a recent comment in which he indicated each state should determine the legality of abortion for itself.

According to the press release, The Satanic Temple has filed both state and federal lawsuits against Missouri “on behalf of Mary Doe, a pregnant woman seeking an abortion.”

Missouri law requires “that all women seeking to lawfully terminate their pregnancy must be given reading material claiming that life begins at conception, and they must endure a 72-hour waiting period between their initial appointment and their actual abortion procedure. The Temple objects to these restrictions on religious grounds because they violate the Temple’s belief in the inviolability of one’s body,” the Temple said.

The Satanic Temple’s agenda: “Civic-minded Satanists and allies in The Satanic Temple have … advocated on behalf of children in public school to abolish corporal punishment, applied for equal representation where religious monuments are placed on public property, provided religious exemption and legal protection against laws that unscientifically restrict women’s reproductive autonomy, … and applied to hold clubs along side other religious after school clubs in schools besieged by proselytizing organizations.”

For the Valentine’s Day fundraiser, prizes will be awarded to the individual who raises the most money and gets the most hugs, and kisses for Satan. Next year, the Temple said it hopes to launch a “My Bloody Valentine” blood drive.

Giving the devil his due: Satanists raise Valentine’s Day funds for abortion and against Trump, Hugs and Kisses for Satan, The Satanic Temple, WorldTribune.com