A tweet congratulating Justice Amy Coney Barrett on her confirmation to the Supreme Court was removed by the Girl Scouts after pressure from the leftist cancel culture mob. 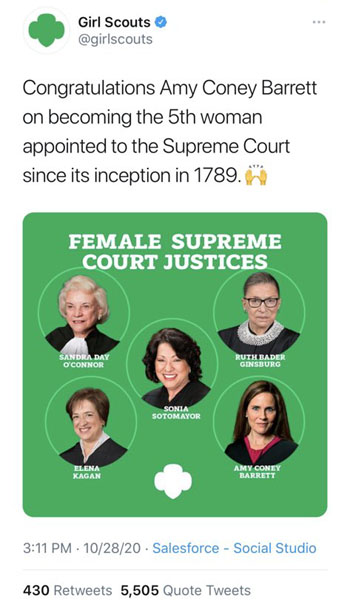 The Girl Scouts tweeted: “Congratulations Amy Coney Barrett on becoming the 5th woman appointed to the Supreme Court since its inception in 1789” ending with an emoji of hands raised up.

Leftist Massachusetts Democrat Rep. Ayanna Pressley was part of the cancel culture mob that went after the Girl Scouts. Pressley said: “What kind of patch does one earn for uplifting a woman who is the antithesis of justice?”

Another Twitter user, who identified as a “life-time Girl Scout,” tweeted: “I already felt uneasy as a trans person in this organization, but now I really understand that with this message that Girl Scouts really does not support me or my trans/LGBTQ siblings.”

Following backlash from the mob, the Girl Scouts deleted the tweet and issued a statement saying “Girl Scouts of the USA is a nonpolitical, nonpartisan organization. We are neither red nor blue, but Girl Scout GREEN. We are here to lift up girls and women.”

Noah Michelson, editorial director of HuffPost Personal, argued in a Facebook post that there was “no requirement that we celebrate someone as a hero to women simply because she identifies as a woman, especially when the thing she did was actually done for her by a gang of disgraceful goons and when she is poised to destroy the lives of so many people.”

Michelson did not indicate an identification as a life-time Girl Scout.

One conservative woman risked her own cancellation by the leftist mob by pointing out that she didn’t “trash the Girl Scouts when I didn’t agree with things that were against my beliefs.”

“When other conservatives trashed Girl Scouts for leftist ideas, I defended it,” the woman added. “Now I see it being trashed by the so called tolerant left for uplifting a female to the Supreme Court. That is disappointing. Those of you bashing the organization, please remember there are conservatives that support Girl Scouts too. I was grateful to see the post in support of WOMEN, regardless of who they are.”