Lawyers from the Trump campaign are currently engaged in an effort to stop Democrats from transforming the American electoral system from one where the voters decide the outcome to one where the vote counters select who wins. 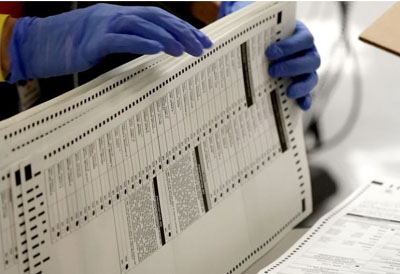 The Trump campaign on Thursday launched an online voter-fraud complaint form and publicized a hotline as the president stepped up his accusations of illegalities in ballot counting. Much of Trump and his campaign’s battle against fraud is being blocked by Twitter.

“We have been getting countless incoming calls from people all over the country reporting the fraud and the abuse,” said Trump campaign manager Bill Stepien. “The Democrats’ lying, cheating and stealing is running rampant all over this country. The president goes to bed with a lead a sizable lead in states across the country, [and] new votes are mysteriously found in a sack.”

And the president shouldn’t assume that the results being reported, such as in Arizona, are “legitimate,” he said.

Trump legal adviser Harmeet Dhillon told Fox Business host Lou Dobbs that she was “confident that some of those things will be resolved without a lawsuit. But the narrow ones that require it, we are going to very aggressively pursue them all the way.”

Dhillon tweeted on Thursday: “Shout out to all the Republican lawyers working around the clock in the field, witnessing ballot counting, staffing hotlines, documenting law-breaking & potential fraud, filing lawsuits, giving it all… several of my law firm colleagues are giving their time — proud of them!”

Dhillon tweeted on Wednesday: “I joined @FoxNews @IngrahamAngle to talk about the #2020Election lawsuits and explain specifically what we are seeing in #Pennsylvania2020. Making up laws on the fly is the basis of a lot of these challenges.”

Gingrich noted: “Philadelphia is notorious for [being] a place that steals votes. All those things ought to be looked at, first of all by the law enforcement side. Because those things are crimes,” he said.

Meanwhile, Project Veritas released a video on Wednesday showing a Michigan Postal Service whistleblower detailing a directive from his superiors to back-date late mail-in-ballots to Nov. 3.