Georgia state trooper: ‘I only kneel for God’

In refusing to kneel for protesters at a Black Lives Matter rally in Hartwell on Sunday, Georgia State Trooper O’Neal Saddler was recorded telling a protester that he only kneels “for one person, and that’s God.”

“I was supposed to be out of town this weekend with my wife,” Saddler was seen in a video posted to Facebook telling a protester after she apparently asked him to kneel.

“I took off today, this weekend, but I’m out here just to make sure y’all are safe. Don’t go there with respect, okay? I have much respect, but I only kneel for one person, and that’s God.”

“While police kneeling or marching with protesters as an act of solidarity has become commonplace as protests sparked by the death of George Floyd in Minneapolis Police Department custody continue to spread across the country, some protesters consider it a ‘PR stunt’ that does not help their movement.”

Meanwhile, President Donald Trump on Sunday retweeted a post which called Joe Biden a “coward” for kneeling before protesters.

The post retweeted by Trump showed a picture of Trump walking in front of a crowd next to a picture of Joe Biden kneeling in a church with activists standing behind him. The two images are captioned, “Leaders lead. Cowards kneel.”

He was asked to kneel today, and this was his response. 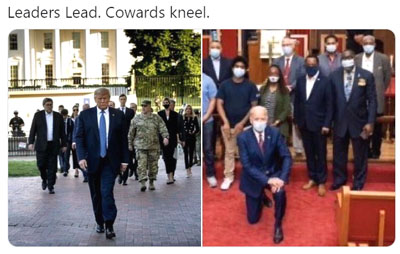