Administrators in a North Carolina school district are allowing transgender students to use the bathrooms and locker rooms of their gender identity, which is prohibited under House Bill 2 (HB2), a report said.

Wake County Sheriff Donnie Harrison said a transgender student who was born a boy was seen coming out of the girl’s locker room at West Millbrook Middle School in Raleigh, adding that the school’s principal “was OK with it,” WRAL-TV in Raleigh reported. 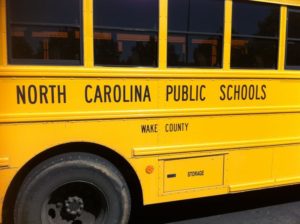 The report said Harrison “called out the school system on their lack of clarity” over HB2. The sheriff also “threatened to pull his resource officers out unless the situation was addressed.”

The principal “allowed this person, male that is transgender, going to be a female, to go in there as long as he did not take off his underwear,” Harrison said.

“I asked the parents of the girls in the dressing room, did they know that this has been happening? I have no problem with anything going on, other than the fact when the answer came back no,” he said.

A spokesperson for Wake County school’s said the system “is not considering” a transgender bathroom policy “at this time due to competing and conflicting court cases.”

Harrison followed up by sending a letter to the school district. Superintendent Jim Merrill replied, saying “bathroom and locker room access was left up to school administrators.”

The Wake County School Board quietly “strengthened” its policies to “include a prohibition of any kind of discrimination based on gender identity,” A.P. Dillon wrote for the LadyLiberty1885 website. “Yet when I reached out to the Board itself, they refused to comment.”

Dillon’s report noted “interactions with parents” show “that at least three high schools and one middle school in the Wake County school district are permitting access of a student claiming to be transgender into the facilities of the opposite sex.”

The report said none of the parents would go on the record “for fear of reprisal either by the school or by LGBT groups associated with the assault on North Carolina” over HB2.