When Trump campaign associates began to be dragged into the Russia investigation, many picked up attorney Sidney Powell’s book based on her experience with the government’s prosecutions of Enron and the late Republican Sen. Ted Stevens.

Michael Caputo, a Trump campaign adviser, told The Washington Times: “When the bogus Russia investigations started, many of us caught up in the hoax passed around Sidney Powell’s book ‘Licensed to Lie’ to prepare for the worst. She’s a real expert on the Justice Department’s habit of hiding exculpatory information. Today she’s representing all of America, shining a light on this systemic corruption and advancing our knowledge of the origins of this politically commissioned inquiry.” 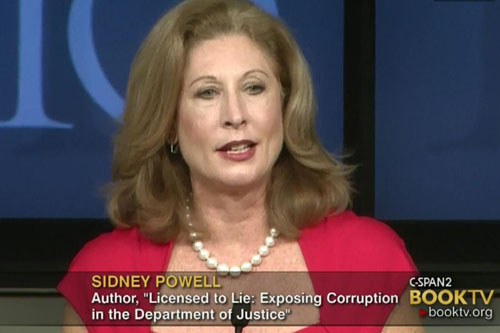 Powell, who in the book was one of the first to expose the “Deep State”, is now representing Michael Flynn and last week filed a motion asking U.S. District Judge Emmet G. Sullivan to force the DOJ to relinquish a trove of documents related to Flynn’s case.

In a Sept. 15 report for The Washington Times, Rowan Scarborough noted that Powell, a Texas appeals attorney, “wants to prove that former special counsel Robert Mueller didn’t abide” by Sullivan’s “Brady” order in February 2018. (The term derives from the 1963 U.S. Supreme Court decision in Brady v. Maryland that mandates that prosecutors turn over exculpatory evidence to the defense.)

Powell’s aim, Scarborough wrote, “is twofold: First, find Brady material by delving deep inside the FBI and the Justice Department’s Trump-Russia probe, akin to how Republicans did the same chore last year. Second, ask the judge to dismiss the case based on a Brady violation.”

“The government has exceeded its discovery and disclosure obligations in this matter, including those imposed pursuant to Brady v. Maryland,” Grack said in an Aug. 30 filing.

Powell said: “Not only have the prosecutors thumbed their noses at this court’s order, they have ignored the rules of ethical conduct for the D.C. Bar.”

Since Flynn’s guilty plea on Dec. 1, 2017, new revelations emerged about how the FBI went about targeting Trump aides, including Flynn.

New evidence has been disclosed since Flynn’s guilty plea:

In a list of 40-plus items, Powell is demanding access to FBI agent interview notes, or 302s; internal memos; wiretap transcripts; and records of any anti-Flynn leaks to reporters.

⦁ Stefan Halper’s role in providing the FBI with any information on Flynn. Halper is a Washington national security adviser and Cambridge University professor who was retained by the FBI to spy on Trump campaign advisers. Flynn wants “all payments, notes, memos, correspondence, and instructions by and between the FBI, CIA or DoD with Stefan Halper.”

⦁ All un-redacted text messages between Strzok and his then-girlfriend, former FBI counsel Lisa Page. They both expressed deep dislike of candidate Trump and his supporters.

⦁ Any wiretap applications that deal with Flynn. (It is known the FBI obtained four wiretap warrants on Trump volunteer Carter Page based largely on the Christopher Steele dossier.)

⦁ Information on any U.S. intelligence spies assigned to Flynn since he retired in 2014 after heading the Defense Intelligence Agency.

⦁ All information that came from State Department official Kathleen Kavalec, one of several Obama political appointees who met with Steele or received his anti-Trump allegations.

⦁ The phone records of former Director of National Intelligence James Clapper and Washington Post columnist David Ignatius. Ignatius broke the story on U.S. intercepts of Flynn’s phone calls with Kislyak. Conservative pundits say someone in the Obama administration committed a felony with that leak.

⦁ Any FBI records on leaks to the press on Flynn from top Obama officials.

Judge Sullivan said in a written order Sept. 11: “There is a strong presumption in favor of public access to judicial records.”