There are many third rails that the Left says conservatives can’t touch lest the cancel culture mob come after them.

Transgenderism and Joe Biden are two of them.

When you touch both of them at the same time, as was the case with cartoon duck “Mallard Fillmore”, you’re roasted. 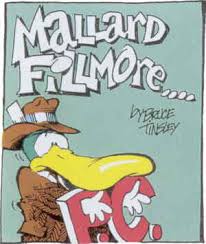 The conservative comic strip created by Bruce Tinsley was simultaneously dropped by Gannett newspapers across the country after two strip (see below) were critical of Biden and biological males competing in women’s sports, Valerie Richardson reported for The Washington Times on March 3.

“It was a big shock,” Mr. Tinsley told The Washington Times. “From what I’m hearing, it was unprecedented. My syndicate had never seen anything like it.”

“Mallard Fillmore”, which Tinsley first created 27 years ago, chronicles the exploits of a politically conservative duck who works as a reporter at a television station in Washington, D.C.

Tinsley said officials at King Features, which syndicates the cartoon, said that “a decision was made at the [Gannett] corporate level, and they weren’t sure exactly why, except that they were sure it was about those two cartoons.”

The two comics ran Feb. 19-20. The first depicts Biden musing: “For too long, segregation sullied women’s sports … They were restricted to women! Thank goodness those dark days are over.”

In the second cartoon, Biden says, “I hear what you, the American people, want me to do … kill fossil-fuel jobs … devalue Americans’ labor … and help more transgender athletes beat the *@!# out of biological females.”

Tinsley told the Washington Times he didn’t think the strips referring to Biden’s Jan. 20 executive order on gender identity and sexual orientation were over the top.

“I’ve thought a million times, ‘This is it, I don’t even know if I’m going to turn this in,’ ” said Tinsley, referring to previous comics. “But of all the cartoons — it vaguely centers on Biden’s doing that as his first executive order. There certainly was nothing derogatory about transgender people. It was just about what I see as a really unfair environment in sports.”

In late February, Tinsley said readers were contacting him about their newspapers pulling “Mallard Fillmore”.

The notice was reprinted Feb. 26 by the website Jackson Jambalaya, which remarked, “Well, well, well, The Purge continues.”

Tinsley said “Mallard Fillmore” continues to be syndicated by King Features: “They’ve been really supportive,” adding that his editors warned him that his royalty check would be significantly smaller with the strip running in fewer newspapers.

“There are so many cartoons about this issue, about all the people getting canned — the Gina Carano thing, and Dr. Seuss,” Tinsley said. “I know how it feels now.”

Richardson noted: “The roasting of ‘Mallard Fillmore’ comes with outrage rising on the right over cancel culture, the social phenomenon blamed for incidents such as Disney’s firing last month of actress Gina Carano from ‘The Mandalorian’ and the Tuesday decision by Dr. Seuss Enterprises to stop publishing six books.”