Bookies have never been accused of a lack of creativity, and they are proving that as the coronavirus outbreak has all but shut down sports in the United States.

Bets can’t be placed on who will pull off the biggest upset in the NCAA basketball tournament, how many three-pointers Steph Curry will hit in a given game, or who will have the low score at the Masters in April. 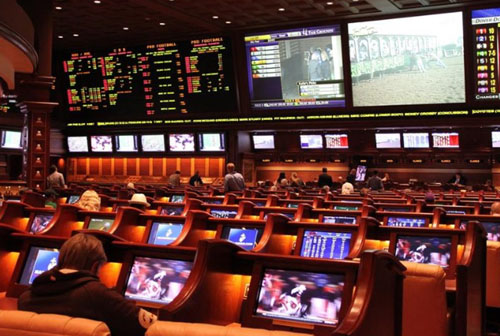 Bookmakers are still offering sports-related bets — on questions such as whether the 2020 Summer Olympics will open as scheduled on July 24 and which league will play the first postpandemic game: the NBA or MLB, Valerie Richardson noted in a March 22 report for The Washington Times.

“Instead of taking wagers on March Madness, online bookmakers have begun to offer bets on everything they can imagine, including the price of gold, whether it will rain in Los Angeles and how many times President Trump will tweet in a given day,” Richardson wrote.

Bookmaker.eu current event trader Rick Daglass said in a statement: “With a large portion of the population working from home during these unprecedented times, we wanted to help create an entertaining distraction and help pass the time. With a lack of games to wager on, we are looking at creating daily markets to fill that void. After all, how much Netflix can you watch?”

For those seeking real sports action, Richardson noted, “the center of the athletic universe may have shifted to countries like Nicaragua, where soccer and baseball are in full swing. For hoops, fans can place bets on the Taiwan Super Basketball League. Hockey fans can check out the Belarusian Extraleague.”

Some horse racing and greyhound racing events are continuing to take place in the U.S. but are being held behind closed doors without fans. But they are still available for betting.

Bovada head oddsmaker Pat Morrow said the online betting company has turned to relatively obscure contests such as Russian hockey, Turkish volleyball and table tennis to bridge the gap left by the suspension of major U.S. and European sports, including Formula 1, FIFA and Premier League soccer.

“We’re really kind of stepping out of our comfort zone,” said Morrow. “No idea is a bad idea as long as we keep things tasteful.”

Examples include betting on the maximum temperatures in major U.S. cities and the plot twists of the HBO series “Westworld,” as well as expanded offerings on the U.S. election scene.

Politically savvy gamblers can place bets on whether there will be additional state primary elections or a Democratic National Convention this year and even whether the presidential election will be held as scheduled on Nov. 3.

One hot ticket: Will Sen. Bernie Sanders drop out of the Democratic presidential primary race by the weekend?

“We’re not replacing the NBA or March Madness, but political wagering is something we’ve done for more than a decade,” Morrow said.

Morrow said Bovada has fallen to less than 5 percent of its normal earnings in the wake of sports cancellations driven by the coronavirus outbreak.

“It’s not devastating during the summer months by any stretch of the imagination, but if you look at the month of March in just Nevada, $500 million was bet on basketball alone, with about 70 percent expected to come out of the NCAA tournament,” said Todd Fuhrman, co-host of “Lock It In” on Fox Sports.

In the meantime, Bovada is welcoming ideas for wacky bets and asking those with suggestions to go to Morrow’s Twitter account at @thePatMorrow.

“For everyone’s mental health, certainly for my mental health, it’s important sometimes to lose yourself in something a little sillier than what’s going on in the world,” he said.

Meanwhile, Richardson reported that the absence of major sporting events has created an opportunity for minor indoor sports. Online poker is booming — and so is marble racing.

Jelle’s Marble Runs, founded by a pair of brothers from the Netherlands, has captured major interest since the onslaught of COVID-19. Front Office Sports said the game has rolled up a 339 percent increase in YouTube views and a more than 999 precent jump in subscribers.

Marble racing is a pretty simple concept. A group of marbles are sent down a track and the first marble to the finish line wins.

Desperate and deprived sports junkies can tune into the Jelle’s Knikkers channel to watch matchups such as the Rojo Rollers versus the Savage Speeders.

“The last few days have been absolutely incredible for the whole team,” Jelle’s spokesman Anton Weber told Front Office Sports. “We knew that with the unfortunate circumstance of essentially all major sport events canceled — we are big [Formula 1] fans ourselves, for example, and were devastated to hear that the season launch has been postponed — that this might be our chance to shine.”