As the corporate media go to great lengths to protect the Trump-Ukraine “whistleblower’s” identity (Eric Ciaramella), ABC News top management is going all out to expose the person who blew the whistle on Amy Robach’s venting of frustration about the network killing her Jeffrey Epstein exclusive three years ago. 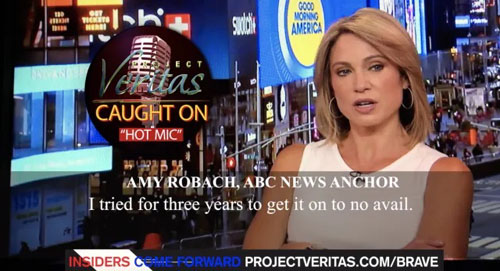 ABC said it is working to ascertain the identity of the person who leaked the video of Robach to Project Veritas.

Related: ABC to anchor on Epstein expose: ‘This is a stupid story’, November 6, 2019

“We take violations of company policy very seriously, and we’re pursuing all avenues to determine the source of the leak,” said an ABC News spokesperson in an email to The Washington Times.

Quite a contrast with the major media’s pursuit to keep the identify of the Trump-Ukraine “whistleblower” (Eric Ciaramella) hidden.

Project Veritas president James O’Keefe has said that the “ABC insider” still works at the network, and tweeted Wednesday that “sources are giving us more insider tape within @ABC.”

“The insiders tell us they trust us over any other media outlet. @Project Veritas is past the point of no return on this one,” O’Keefe said.

In a Tuesday statement, ABC News said that Robach’s Epstein story failed to meet its standards to air, “but we have never stopped investigating the story.”

Robach issued a statement Tuesday, shortly after the video was released, saying that the hot mic caught her in “a private moment of frustration,” and that the Epstein report never aired because “we could not obtain sufficient corroborating evidence to meet ABC’s editorial standards.”