Founder David Brock once described Media Matters as aiming to wage an all-out campaign of “guerrilla warfare and sabotage” against Fox News. 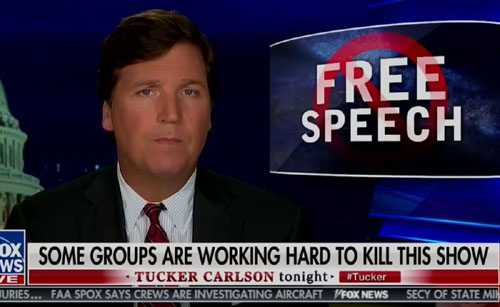 Carlson said on March 11: “Since the day we went on the air, they [the Left] have been working hard to kill this show. We haven’t said much about it in public; it seemed too self- referential. The point of this show has never been us. But now, it’s obvious to everybody. There is no pretending that it is not happening. It is happening.”

Larry Ward, president of Constitutional Rights PAC, is organizer of the new Stand with Tucker Coalition.

Ward said: “Don’t forget the disturbing intimidation tactics by Antifa protestors surrounding Tucker Carlson’s home terrorizing his family, chanting, ‘Tucker Carlson, we will fight. We know where you sleep at night’. Media Matters is Antifa with a bigger budget.”

Robert Morton, publisher of World Tribune said: “Tucker Carlson should be honored for upholding the Free Press against an assault by Soros-funded tools who seek to destroy him and America’s founding principles.”

Ed Rollins, Chairman of Great America PAC says, “Tucker Carlson is a gentleman, a great American, a devoted family man, an intellectual who’s voice needs to be heard. Oh and he’s also a thinking conservative and thought leader which is why the liberals want to shut him down.”

James O’Keefe​, founder of Project Veritas, said: “Our broken and corrupt media deserve no apologies. If we can’t trust their reporting why should we trust their outrage? Tell them to pound sand.”

Rep. Paul Broun, Georgia Republican, said: “Tucker Carlson is the most reasonable voice on television today. All Americans should Stand with Tucker.”

Alan Gottlieb, founder of the Second Amendment Foundation, said: “The left is at war with the Constitution. They use the same deplatforming tactics to attack the First and Second Amendments. They create faux outrage to punish advertisers, retailers, broadcasters who dare do business with anyone who doesn’t subscribe to their liberal worldview. It must stop. I stand with Tucker.”

Media Matters continued to dig in on its smear campaign against Carlson on March 13, announcing that it would protest outside Fox News headquarters in New York City. The leftist group received kudos from three Obama administration officials.

On the podcast “Pod Save America,” former Obama spokesperson Tommy Vietor, as well as former Obama speechwriters Jon Favreau and Jon Lovett encouraged listeners to attend the protest of what Vietor called “an emergency meeting” of Fox’s advertisers.

“So if you want to send a message, and you want people to actually care there, let the advertisers know because that’s the only reason the Bill O’Reillys and the Laura [Ingrahams] and the other people actually get punished,” Vietor said.

“And the Glenn Becks too. It’s the only thing that’s worked,” added Lovett.

Carlson, in his opening monologue on March 12, calling into question the legality of Media Matters’ political behavior as a nonprofit organization.

“In its original tax application to the IRS, Media Matters claimed that the American news media were dominated by a pro-Christian bias that needed them to balance it. Despite the obvious absurdity of that claim the group received non-profit status,” Carlson said. “It has been violating the terms of that status flagrantly ever since. For example, during the Obama administration, Media Matters held weekly strategy discussions with the White House about how to hurt its political enemies.”

“This is a violation of federal tax law,” Carlson added. “Tax exempt nonprofits cannot function as an arm of a political party. Media Matters clearly does.”