UNITED NATIONS — Elected on a wave of dynamism a mere eighteen months ago, French President Emmanuel Macron has morphed into the figure of derision and disillusion.

From a stunning 66 percent landslide win in the May 2017 elections to a perilous political free fall, Emmanuel Macron, France’s youngest president, now has an 18 percent approval rating. 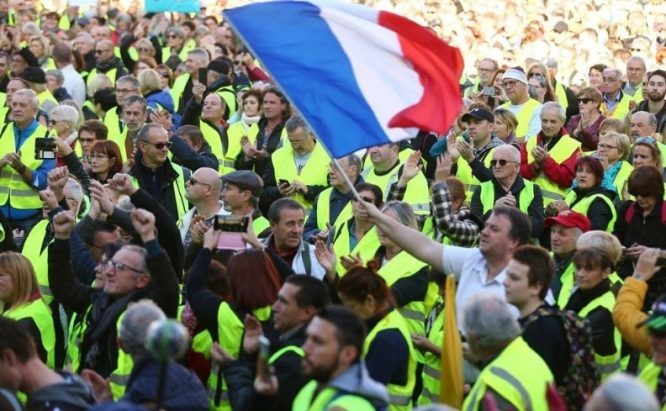 But alas, he flew too high and close to the sun and like the mythological Ikarus, his wings melted in the harsh light of sullen rural populace discontent over steep taxes and stagnant salaries.

Now for four tumultuous weekends, an entrenched protest movement, the Gilets Jaunes or the Yellow Vests, have confronted Macron and his policies on the streets of Paris and towns across France. The Parisian newsweekly L’Express headlined, “France against France.”

The Gilets Jaunes appear less anchored in traditional Left/Right politics than a curious across the board unity between the working poor, the rural lower middle class, and the disaffected who see the president’s policies as favoring rich cities such as Paris and Lyon at the expense of the rural regions. The movement not surprisingly, has gained student support but has no clear leader.

The initial spark came from higher fuel taxes, meant to keep in step with Green Carbon emission standards. But climate policy aside, the deeper reasons are rooted in a smoldering resentment by the silent majority against an officious and remote government and the legions of technocrats who always know better, and a president of the Republic who has a proverbial tin ear for advice.

Anne-Elizabeth Moutet, a noted journalist opined in the New York Post, “Their lives are fenced in by an ever-growing skein of nanny-state regulations. Before the fuel tax, there was the unpopular rollback of the speed limit on France’s roads. ”

France now faces one of its periodic uprisings as hundreds of thousands have turned out nationally wearing the trademark yellow vests and calling for Macron to step-down.

Tragically among the legitimate protesters are the black hooded casseurs, the anarchists and extremist looters, who smash shop windows, burn cars and face-off the police in pitched tear gas choked battles. Violence at the Arch of Triumph and Tomb of the Unknown Soldier shed a dark cloud on the movement.

Philosopher Pascal Bruckner told Le Figaro, “The one who commits violence is not a victim, but a barbarian.”

Yet contrary to the serious unrest which lasted for weeks in 2005, those incidents were largely contained to the banalieus, gritty suburbs where marginalized North African youth created havoc.

These demonstrations are in the very heart of Paris; the iconic Champs Elysees and chic central boulevards. The protesters are the ordinary and mainstream French from the provinces who have come to jolt the city of light into listening to their concerns.

The Political Class and the hauteur of those who know better have triggered a backlash which on weekends has turned chic Parisian shopping districts into surrealistic shut down and boarded up shops in the midst of the busy Christmas shopping season.

One of Europe’s richest and most opulent cities reeks from the smell of tear gas and the sounds of police sirens.

Respected French political commentator Michel Gurfinkiel doesn’t compare the current unrest to the massive 1968 student chaos but sees the crisis in France as part of the populist wave which has been lapping at the European establishments. And contrary to 1968, France does not have a revered President such as Charles de Gaulle. Instead there is the detached technocrat Macron.

It took a month before Macron addressed the protesters on national TV; the speech was too little, too late, and though reasonable, had the aura of a contrite student.

President Macron’s offers of minimum wage increases of 100 Euros per month, and tax free year end bonuses, may actually fan the flames for more concessions. The economy can ill afford these gestures nor the bloated social state.

France has GDP growth of about 1.7 percent this year, about half of the USA. Its unemployment rate of 9.7 percent is double that of the U.S.

Michel Gurfinkiel adds, “A sizable part of public opinion, including people who initially supported the Gilets jaunes, does not want the country to descend into chaos and will accordingly support the president from now on, even if grudgingly.”

In the midst of this mayhem, France lacks an imposing Charles de Gaulle figure. They must instead settle for Jupiter.