Patrick Colbeck, a former state senator in Michigan, has published his research findings about what he describes as a sophisticated coup, the “stolen” 2020 election. See below. 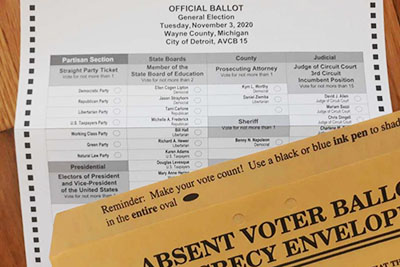 1) Preparation: Create and exploit weaknesses in our election system. How? By weakening the election record chain of custody for the (i) qualified voter file (QVF), (ii) poll books, (iii) ballots, and (iv) vote tally.

Start by seeding the QVF. For example, there were more than 616K ineligible voters in the Michigan QVF heading into the 2020 election. Other measures: no-excuse absentee voting, same-day voter registration, elimination of voter ID and signature verification requirements, and centralized, networked, voting systems.

2) Main Attack: The central tool in this second phase is ballot stuffing via mail-in votes, enabled by seeding the QVF with low propensity and ineligible voters. Importantly, phase 2 requires an accurate prediction of voter turnout to be successful. If those forecasts fail (as they did in the 2020 election), the perpetrators have to shift to a backup plan, the Backup Attack phase.

3) Backup Attack: Algorithmic manipulation of the vote tally when ballot stuffing isn’t netting enough votes. Once the vote tallies have been altered, ballots must be added for reconciliation. And, that’s exactly what happened with the early morning ballot drop-offs after the dead stop to late-night vote counts in all swing state.

4) Cleanup: The defense phase involves censorship and evidence destruction. Colbeck says canvassing is critical to combat the fraud, and recommends starting with the QVF.

Also on Colbeck’s investigation wish list: an audit of the election night reporting results, from the precinct level to The New York Times. No one has done this yet.