Forgotten conflict: The Korean War, 70 years on, in photos

Photographs tell the story of a “forgotten war” that began 70 years ago and has never formally ended.

At the close of World War II, the Korean Peninsula was occupied by Soviet troops in the north and U.S. forces in the south. The Soviet Union had declared war on Japan in August 1945 during the final days of World War II.

On June 25, 1950, after the two former allies left the peninsula, North Korea’s communist dictator Kim Il-Sung launched an invasion across the 38th parallel in an attempt to seize South Korea and turn it into a communist state. Kim reportedly received the personal blessing of Josef Stalin to launch the shock invasion.

With the world still haunted by the disaster of “appeasement” to Nazi aggression during the 1930s, the prospect of military intervention in Korea was initially popular.

A UN Security Council resolution passed by a vote of 7-1, with communist Yugoslavia against, called for the deployment of troops to “repel the armed attack [on South Korea] and to restore international peace and security to the area.”

The “police action” backed by the UN began with a U.S. attempt to slow the southward advance of the communists.

The first U.S. troops were vastly outnumbered and under-equipped. The men watched bitterly as most of their “anti-tank” weapons pinged harmlessly off the hulls of the advancing communist T-34s. In the first task force of 400 U.S. soldiers, 60 were killed and 82 were captured.

Soon the relentless communist advance had pushed UN forces into the southeastern tip of Korea, where they took a stand at the so-called Pusan perimeter.

As the defensive line around Pusan held off waves of attacks by the overstretched North Koreans, massive reinforcements and supplies were shipped into the remaining nugget of UN-held territory.

As autumn neared, U.S. General Douglas MacArthur ordered a risky seaborne assault on the port city of Inchon, hundreds of kilometers to the rear of the communist forces.

The successful Inchon landing was a turning point in the war. UN troops were advancing on Seoul as communist forces desperately attempted to penetrate the UN line hundreds of kilometers to the south.

By October, the overwhelming firepower of the UN forces and the surprise of the Inchon landings had communist forces on the run.

UN forces soon drove the depleted communists back across the 38th parallel where North Korea’s military adventure had begun a few months earlier.

After fierce backroom debate over whether the drive of UN troops should be halted at the formal boundary between North and South Korea, Washington told its military leadership in Korea that “your military objective is the destruction of the North Korean armed forces…north of the 38th parallel.”

But then, China secretly waded into the conflict by sending hundreds of thousands of lightly armed but highly experienced “volunteer” fighters into North Korea to lay in wait for the advancing UN forces.

In late 1950, the formidable Soviet MiG-15 fighter jets (pictured here in a 1963 file photo) appeared in the skies above North Korea. Many of the jets were flown by ace Soviet pilots who reportedly dressed in Chinese uniforms. The Kremlin consistently denied that Soviet pilots were involved in aerial combat above Korea, even as U.S. pilots heard them swearing in Russian over the radio during dogfights. 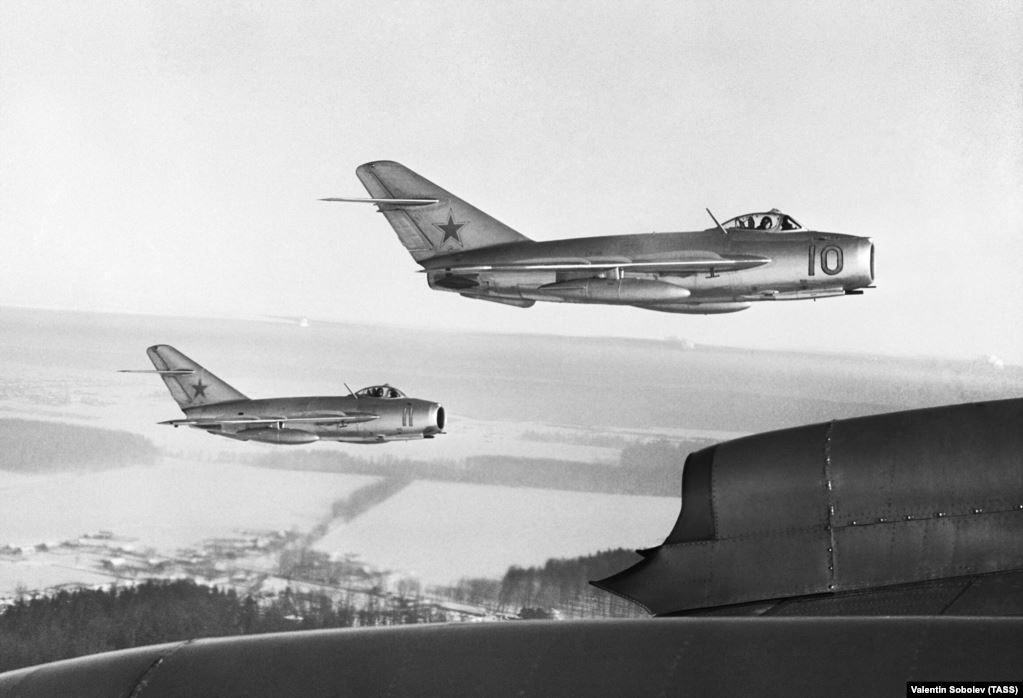 Faced with a massive, energized Chinese fighting force, UN troops were again forced to withdraw. As columns of troops and armor crawled south, they were attacked by Chinese troops who ghosted through the surrounding hills, prompting a U.S. general to famously describe the retreat as “just attacking in another direction.”

Then, after pulling out from North Korea, another wave of UN reinforcements was deployed in the south, helping to turn the tide of battle once more.

By the summer of 1951, leaders of countries in the war agreed to begin negotiations for an armistice.

But negotiations for peace progressed painfully slowly. At one point, the two delegations simply glared in silence across the table for two hours and 11 minutes. The fighting, and the immense suffering of the Korean people, continued as both sides used military strength to try to gain an advantage at the negotiating table.

Finally, on July 27, 1953, the UN Command signed the Korean Armistice agreement that divided Korea loosely along the 38th parallel. No peace treaty has ever been signed, meaning the two Koreas technically remain at war.

The war cost the lives of an estimated 3 million people — most of them Korean civilians, and largely wiped out most major cities on the Korean Peninsula.

According to the U.S. Department of Defense, the United States suffered 33,686 battle deaths – about 90 percent of the total losses among UN forces.

Seventy years on from the start of the Korean War, the North remains an impoverished totalitarian dictatorship, while the South is generally seen as one of the world’s most democratic and prosperous nations.