The Democratic National Committee (DNC) and Hillary Clinton’s campaign are directing and paying instigators to stir up trouble at Donald Trump’s events, a new video by Project Veritas Action reveals.

The first production in a multi-part series, supported by emails recently released by WikiLeaks, “exposes the dark secrets at the highest levels of the DNC and Clinton presidential campaign,” Project Veritas Action said on Oct. 17. 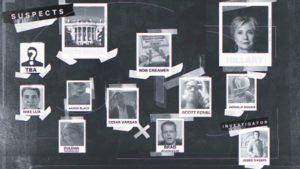 In the video, Scott Foval, the National Field Director for a non-profit organization named Americans United for Change, tells a Project Veritas investigator that they contract “directly with the DNC and the [Clinton] campaign both.”

“I am contracted to him [Bob Creamer],” says Foval to an undercover reporter. “But I answer to the head of Special Events for the DNC and the head of special events and political for the campaign.

Bob Creamer founded and is listed as a partner on the website of the Democratic consulting firm Democracy Partners. He is the husband of Jan Shakowsky, a congresswoman from Chicago. In 2005, he pleaded guilty to tax violations and bank fraud.

When discussing the dirty tricks employed by Foval, Creamer and others at the bequest of the DNC and Clinton campaign, a Project Veritas Action investigator asks Foval if he would recognize Foval’s work.

“Oh, I know you do,” responds Foval. “Everybody does. You remember the Iowa state fair thing where Scott Walker grabbed the sign out of the dude’s hand and then the dude kind of gets roughed up right in front of the stage right there on camera?” Foval asks. “That was all us. The guy that got roughed up is my counterpart who works for Bob.”

Foval also references Shirley Teeter, a 69-year-old woman who claims that she was assaulted at a Trump rally in North Carolina. “She was one of our activists,” he says.

In the video, Aaron Black (real name Aaron Minter, “nobody is really supposed to know about me”) shares credit with Creamer for the Chicago Trump rally which was shut down.

“So the Chicago protest when they shut all that, that was us,” says Black/Minter. “It was more him [Bob Creamer] than me, but none of this is supposed to come back to us, because we want it coming from people, we don’t want it to come from the party. So if we do a protest and it’s a DNC protest, right away the press is going to say partisan.  But if I’m in there coordinating with all the troops on the ground and sort of playing the field general but they are the ones talking to the cameras, then it’s actually people.  But if we send out press advisories with DNC on them and Clinton campaign it just doesn’t have that same effect.”

Foval goes on to say that “we have mentally ill people, that we pay to do s–t, make no mistake. Over the last 20 years, I’ve paid off a few homeless guys to do some crazy stuff.

“But the reality is, a lot of people especially our union guys.  A lot of our union guys…they’ll do whatever you want.  They’re rock and roll. When I need to get something done in Arkansas, the first guy I call is the head of the AFL-CIO down there, because he will say, ‘What do you need?’  And I will say, I need a guy who will do this, this and this.  And they find that guy.  And that guy will be like, Hell yeah, let’s do it.”