Flying the fascist skies update: Will mask mandate for plane travel ever end?

The Transportation Security Administration’s face mask requirement for airports, planes, buses and rail systems was scheduled to expire on March 18.

But Team Biden confirmed on Thursday that the TSA will extend the masking guidelines for one month, with the expiration now set for April 18. 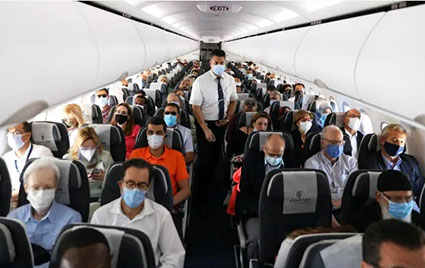 “During that time, CDC will work with government agencies to help inform a revised policy framework for when, and under what circumstances, masks should be required in the public transportation corridor,” the TSA said in a statement. “This revised framework will be based on the COVID-19 community levels, risk of new variants, national data, and the latest science. We will communicate any updates publicly if and/or when they change.”

The requirement has remained in place even after the CDC announced a shift in Covid-19 guidance late last month, saying most Americans are safe without a mask in indoor settings.

In a March 7 op-ed for Townhall.com, Scott Morefield noted: “Forcibly muzzling passengers who have already been treated like cattle for decades is the perfect leftist power-play, and they’re playing it for maximum impact.”

As Covid restrictions were fading away, even in blue states, “for the ‘crime’ of simply needing to fly to Texas I found myself again forcibly gagged while traversing a bleak, mindless hellscape where time has inexplicably stood still,” Morefield wrote. “Compared to the ‘free’ world, airports and airplanes are like dystopian, alternate realities with a forced order that has absolutely zero basis IN reality. In it, we masked zombies wander seemingly aimlessly from place to place, barely looking up, clearly agitated and unhappy yet powerless to remedy the situation lest we find ourselves on a no-fly list or, worse, in a prison cell.”

Traveling, Morefield added, “is stressful enough without this, and yet this is what our tyrannical overlords impose in the name of ‘safety.’ They don’t care about your ‘comfort,’ only your obedience. They know damn well cloth masks aren’t worth the t-shirt material it took to manufacture them and that the recycled air on planes makes them as safe or safer than anywhere else indoors.”

Morefield noted that he would not be surprised if the mandate was extended beyond March 18, which it was.

“Why? I submit it’s because they can. It’s a scientific fact that if these crazed, hypochondriac leftists could control society like they can control those places with the iron fist of the TSA, we’d be in masks forever. They can’t, of course, which is why the politics changed enough for them to ‘relax’ mandates almost everywhere. But airports and airplanes are a different animal. There, the ‘security theater’ practiced for decades fits perfectly with the newer but even more sinister ‘mask theater’ of the Covid era. If passengers are still forced to remove their shoes because of the clumsy actions of some loser more than twenty years ago, do you think forcibly muzzling people for the next two decades and beyond is an issue for these ghouls?”

Meanwhile, a man who had participated in the truckers convoy in the D.C. area was removed from from a Delta Airlines flight after triggered attendants insisted he remove his “F*ck Biden” sweatshirt.

Jauneil Brooks was on a layover flight in New York when the incident unfolded, The Gateway Pundit reported on March 10.

“Citing a nonexistent company policy, the cabin crew threatened Brooks with placement on the no-fly list for daring to express a political opinion they did not like. He was ordered to remove the clothing or risk the entire plane being grounded – which he reluctantly did. But, even after he complied with their nonsensical orders, they revoked his ticket and kicked him off the flight anyway,” the report said.

Why was Brooks kicked off the flight after removing the shirt? Because as he removed the shirt, he removed his facemask and was told he was in violation of the federal mask mandate for public transportation.

Libs of TikTok reported that it reached out to Delta Airlines about the so-called policy that would restrict people from wearing certain clothing like the “F*ck Biden” hoodie. As it turns out, there is no such policy that exists, according to Delta customer support.

“So technically I can wear a shirt that says ‘F Trump’?” Libs of TikTok asked.”

“Oh. No worries. There are no clothing policy on Delta’s [sic]. You can wear anything you want,” a Delta representative confirmed.

A man was kicked off a @Delta flight for wearing an F Biden sweater, even though he took it off. They claim it’s “delta policy” and threaten him with the no fly list.

I spoke to Delta and it turns out they don’t have a clothing policy and even told me I can wear an F Trump shirt pic.twitter.com/A8mruMxNpF

Flying the fascist skies update: Will mask mandate for plane travel ever end? added by Editor Two on March 11, 2022
View all posts by Editor Two →