In their assault on the Second Amendment, Democrats insist that no American needs a “weapon of war,” which in their minds includes the AR-15. Many on the Left have said the government should confiscate all AR-15s in the U.S. 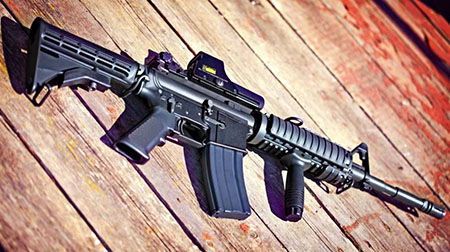 That narrative was shattered last week when a Florida woman defended her entire family from a violent home invasion — using an AR-15 rifle.

The woman, who is eight-months pregnant, saved her husband and pre-teen daughter after armed intruders had broken into the family’s home and attacked them. When the woman brandished the AR-15, the armed intruders fled. The woman shot one of the intruders, who collapsed and died in a nearby ditch, while the other managed to escape.

“They came in heavily hooded and masked. As soon as they had got the back door opened, they had a pistol on me and was grabbing my 11-year-old daughter,” Tampa-area resident Jeremy King told Bay News 9.

“It became real violent, real fast,” King said, adding that he had been pistol-whipped and kicked in the head by the intruders.

The woman then grabbed an AR-15 that was legally inside their house and began shooting at the intruders, hitting one of them.

The intruders “came in with two normal pistols and my AR stopped it,” King told Bay News 9. “My wife evened the playing field and kept them from killing me.”

The Western Journal’s Benjamin Arie noted: “Think about that for a moment, because it’s spot-on and very important. An eight-months pregnant woman, who under normal circumstances might be an easy victim for criminals, was able to defend herself and her entire family against not one but two armed criminals — all because she had access to an AR-15.”

Arie added: “It’s time for the media to tell the whole truth on the firearms issue. It’s time to start asking liberals why they want to keep women defenseless. Banning and confiscating the tools that allow good people to lawfully protect themselves only emboldens criminals — and this incident would have gone very differently if not for the Second Amendment.”