Ladapo said the Florida Department of Health released the findings of a self-controlled case series which they used to evaluate the safety of the Covid vaccines, which “studied mortality risk following mRNA Covid-19 vaccination.”

The evaluation found that “there is an 84% increase in the relative incidence of cardiac-related death among males 18-39 years old within 28 days following mRNA vaccination.”

Ladapo said the state’s new guidance “recommends against the Covid-19 mRNA vaccines for males ages 18-39 years old. Studying the safety and efficacy of any medications, including vaccines, is an important component of public health. Far less attention has been paid to safety and the concerns of many individuals have been dismissed – these are important findings that should be communicated to Floridians.”

The findings also showed that “Males over the age of 60 had a 10% increased risk of cardiac-related death within 28 days of mRNA vaccination,” and that “Non-mRNA vaccines were not found to have these increased risks among any population.”

Ladapo tweeted the above information, adding that Florida “will not be silent on the truth.” 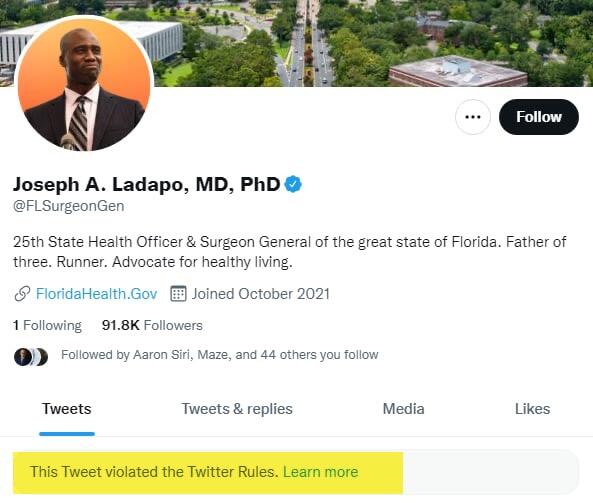 “Twitter appears to have pulled a PayPal, and promptly re-instated the post in question after blowback on the social media site about the censoring. As of about noon on the East Coast Sunday, the Tweet was once again showing up under Florida Surgeon General Dr. Joseph Ladapo’s feed,” Zero Hedge noted.

The Department of Health’s guidance suggests that Floridians talk to their doctors and health care providers about the relative benefits and risks of the Covid mRNA vaccines, and that it should be weighed against the potential risks of the virus.

This analysis comes after the Florida Department of Health issued guidance in March that recommended against use of the Covid mRNA vaccines for “healthy children and adolescents 5 years old to 17 years old.”

The state also recommends “against COVID-19 vaccination among infants and children under 5 years old, which has since been issued under Emergency Use Authorization.”